Corliss Cavalieri: Every Bit The Painter

Corliss Cavalieri’s paintings beg to be read. He concocts absurd imagery reminiscent of storybooks or cartoons, which easily lends itself to uninhibited interpretation. Deceptively simple and deliberately spare, his quirky combinations of recognizable and elliptical elements are visual guessing games, which induce viewers to decipher what things look like. Seemingly abandoning reason, in actuality Cavalieri plays with our understanding of pictorial conventions, employing a full-range of sophisticated techniques to simultaneously suggest and undercut.

Exploiting outline, Cavalieri is able to imply an incomplete or uncharacteristic view of an indefinite object because of the juxtaposition with something familiar or easily grasped. Viewers are lured into seeing the line as contour, rather than embrace ambiguity or simply see the shape for what it is. Some linear configurations can be taken as indicators of perspective and foreshortening, while others translate as directional lines, signs of motion, and weather or atmospheric effects. Sequential or repeated forms can be seen as aggregates or multiples, but just as readily as movement.

The representations of texture and other qualities serve as welcome markers in trying to make sense of incongruity and caprice. Cavalieri creates these effects through color, tonal relationships, contrasts, and other artistic means that are part of our shared visual tradition. What at first might be disconcerting becomes delightful, as plumes, petals, and other imaginings come forth. Within his world of artifice, Cavalieri frequently conveys the appearance of luminosity — a captivating brightness without light. As uncanny as the circumstances may be, the viewer handily applies this information within the painting’s internal logic.

Repeating favorite motifs, Cavalieri reshuffles patterns of representation so they can be free-floating as well as a defining feature. Conspicuous in his vocabulary are cones, or shapes that taper from a base. Sometimes these are rudimentary depictions of identifiable objects, such as an ice cream cone, and at other times completely fanciful figuration. He also repeats protruding coglike forms and reciprocating indentations. This pattern is well-known shorthand for battlements, and this motif becomes a point of departure for other castellated forms. There is something of the doodler in the way Cavalieri lets his hand do the thinking for him, so that a mark or a line becomes an improvisation moving from signification to free association.

Simple thumbnail line drawings provide ideas and content for his paintings. As part of his working practice, Cavalieri keeps notebooks at hand all over his house, and he fills them with “crazy little sketches” made up from his personal iconography. These impromptu drawings are similar to pictographs, especially in the compounding of stylized yet enigmatic elements — an essentialist grammar verging on pattern and blazoned with decoration. As curator at the Civic Center Museum in Philadelphia, Cavalieri managed a collection of 35,000 ancient and ethnographic artifacts, including significant pieces from the Paris Universelle of 1900. Working among objects like a Dogon granary door, Japanese basketry, Amur River fish-skin coats from Siberia, he grew ever more sensitive to universal forms and the decorative impulse throughout world cultures, such that the transpersonal became an integral part of his individual, idiosyncratic expression.

Starting in the nineteenth century, world fairs and exhibitions staged by Western nations brought an array of objects made by craftsmen in colonial territories. A proponent of the ornamental, the poet Mallarmé determined that “the critical role of our century is to collect the most common and the most curious forms born of the Fantasy of each people and each period.” Already turning away from idealism and realism, artists found in these artifacts a visionary or mystical art to which they aspired, perceiving a decorative aesthetic that was contrary to prevailing taste. Cavalieri’s connection with such anthropological and archaeological artifacts is in this same spirit, and he speaks of drawing on a repository of material culture — detritus from past civilizations — to call up or evoke a “parallel world.”

Always including decoration in his work, Cavalieri was strongly attracted to the art of Matisse, when as a student he engaged with the French modernist’s paintings at the Baltimore Museum of Art. Caught up in the turn-of-the-century pursuit of the decorative, Matisse created a new two-dimensional spatiality by assimilating characteristic elements of design evident in a wide range of objects, many of which he collected and included in his paintings. Ornament became both subject and style. Liberating both color and line from description, he destabilized the relationship between figure and ground, blurring distinctions between presence and void, volume and flatness. Through this idiom, Cavalieri found a way “to see the world differently.”

Whereas Matisse’s oeuvre is soigné and self-referential, Cavalieri’s body of work is offbeat and otherworldly, with compositions that are more disjointed than cohering. For the postmodern American, scavenging through the art of tribes or aesthetic communities includes contemporary and urban, popular culture and commodity, tchotchkes and bling. The heterogeneous, eclectic mix of grand and humble sources is internalized by Cavalieri, who treats them as remnants of a vast human enterprise. Wresting from the “realm of their content and context,” Cavalieri says he fragments and “tosses them onto the canvas like visual confetti.”

This festive description of his process masks what is actually quite involved and prolonged. Intensifying the physicality, Cavalieri manipulates pigments and canvas to build up a multilayered surface over a period of time. “I let the images develop through the act of painting.” Usually working at a large scale, the artist takes his drawings and blows them up to the dimension of his panel, which transforms wrist action into open gestures. Preferring lush, “juicy” paint, Cavalieri mixes of lot of color directly on the canvas. With a variety of tools, including brushes, palette knife, hardware items, and ones of his devising, he experiments with a variety of types of paint and additives — from Renaissance oil glazes to spray-can synthetics.

Working on several canvases at once, he may hold onto a painting for years. Bearing the marks of his exertions, the resulting paintings merge images on the picture plane with ghosting effects and heavily worked materials. Using a wall as a rigid support, Cavalieri allows the irregular surface of the wall to leave an impression. At other times, a table accommodates his energetic processes. Adding a layer of white or some other color, he then brings back elements or lets them remain obscured. The artist sets about applying and smearing oil paints to produce transparencies, and forceful scraping and other practices bring out the physical qualities and hint at depth or density. Skilled in the ancient technique of sgraffito, Cavalieri incises and gouges wet paint with sharp instruments. He even puts paintings outside where they might get rained on or baked by the sun.

Abrading the pigments can produce a sheen or shimmer, which may commingle with the illusion of luminosity created by contrasting hues. Similarly, scored lines and actual textures in the paint sit in another dimension than outlines and semblance of texture in the imagery. Reverberating visually and tactilely, these modes of experience are simultaneously complementary and dissonant. The handling of the paint interpenetrates and offsets the flatness of unmodulated color and linear design. Something seems to exist behind. Something seems to penetrate the veil.

Both making up and making, Cavalieri grabs hold of our search for meaning — immanent and transcendent — and his paintings tap into our need to make sense of appearances and our thirst for something beyond. Every bit the painter, he suggests that the world is always more than you know. 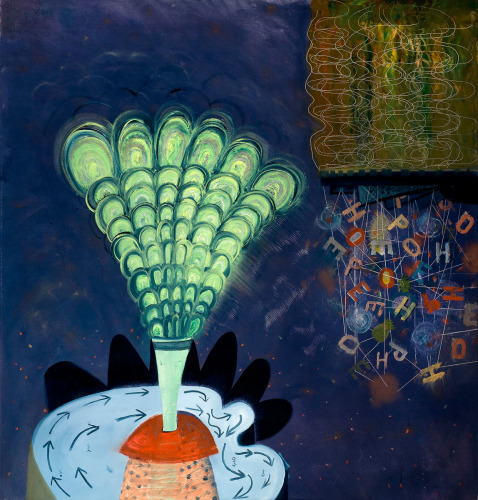 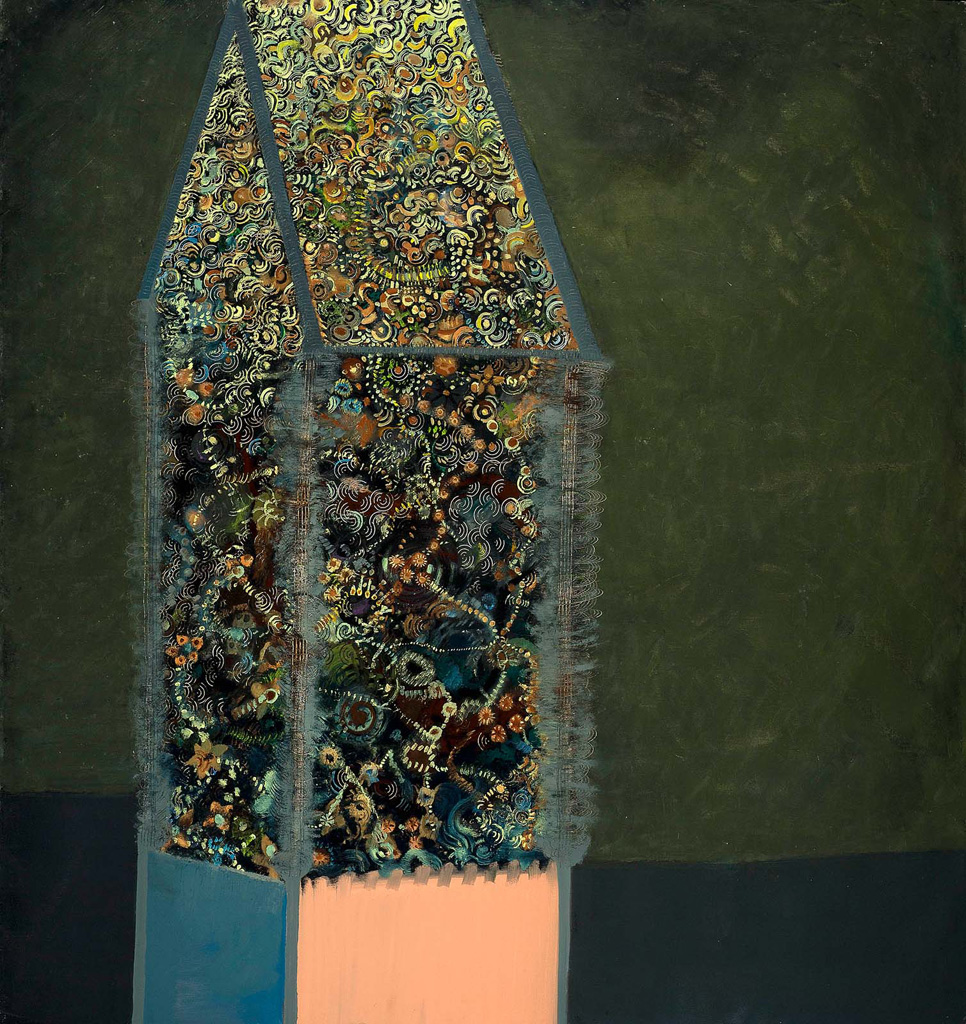 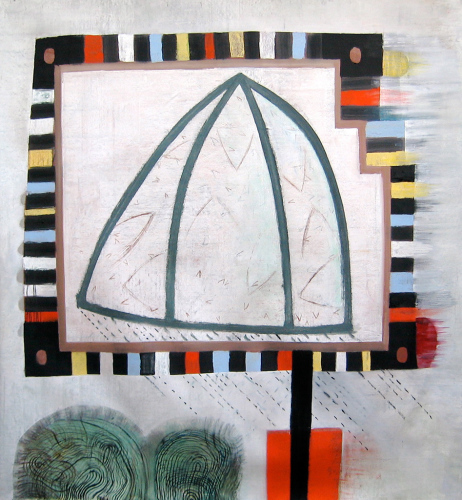 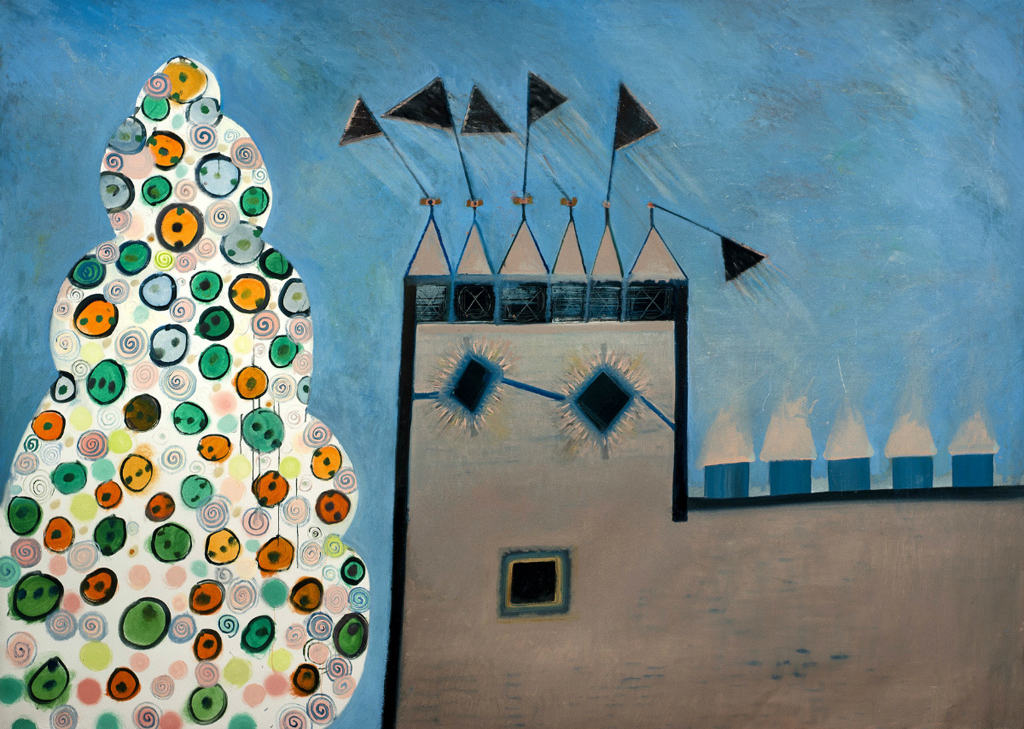