In The Ice Age Goddess. “Sea-Shells” from the Dawn of Art, Cornelia Kavanagh celebrates the first known three-dimensional representations of the female form. During the Upper Paleolithic, or Late Stone Age, 50,000-10,000 BCE, Cro-Magnon hunter-gatherers fashioned small figures with pronounced female attributes out of ivory, bone, antler, stone and fired clay. Because the French Marquis who discovered the first one in 1864 playfully named it Venus impudique to contrast its pronounced nakedness with the Venus pudica of Hellenistic tradition, where female body parts are masked, subsequent discoveries have come to be collectively (and inappropriately) called “Venus figurines.”

Ranging in size from 1.4 to 8.9 inches, the figures seem to have been purposefully designed to be portable, and beg to be held. Almost 200 have been found in layers of earth among weaponry, jewelry and animal remains at archeological sites from southwestern France to Siberia. Most recently discovered, the Venus of Hohle Fels, carved from a mammoth tusk, is also the oldest, dating from 40,000-35,000 BCE.

Since the nineteenth century, these figures have been explained by relating them to practices among historic civilizations or recent hunter-gatherer cultures. Various theories cast them as fertility or cosmological symbols, realistic depictions of actual women, ideals of beauty, self-portraits, ritual icons, cult figures, protective totems, and even pornography. Supported by the work of archaeologist Marija Gimbutas, the belief that the figures were part of a matriarchal society extends beyond scholarship to some who seek female empowerment and spirituality today, and this is the interpretation Kavanagh embraces.

Inspired by the earliest signs of symbolic expression in sculpture, she considers them representations of the Great Mother who was responsible for life, death, and regeneration. Because we can only reconstruct the past from known artifacts, we may never have all that is necessary to understand their context and decipher their meaning. Yet what we hold to be true may be as important as any determination of fact. The goddess figures and even the surroundings in which they were found may not serve as definitive proof of ancient cognitive development or ancestral behavior; but as multivalent works of art, they are open to interpretation and resonate with mythopoetic force.

Diving into her exploration of Ice Age art, Kavanagh read The Mind in the Cave: Consciousness and the Origins of Art, and was intrigued by David Lewis-Williams’ mention of an ochre-stained seashell pendant found at Lascaux miles from the Atlantic Coast. Collecting shells since childhood, she intuitively decided to place Upper Paleolithic goddesses in shells selected to complement each figure. The shells would be the containers for the goddesses, with, as Kavanagh explains, “the nature of each inhabitant organically related.”

Of all natural objects, mollusk exoskeletons have had continuous primal and universal appeal to our species, and their use as ornamentation is among the earliest known evidence of human culture. By joining seashells and goddess figures, Kavanagh situates the natural form within human history and within art history, where the shell has long been associated with birth and regeneration. The best-known antecedent is Botticelli’s The Birth of Venus, a Renaissance painting highly familiar through reproduction and repeated use in advertising. Envisioning the coupling in modernist terms, Kavanagh sees the pre-historic figures as a sculptor might recognize their artistic lineage. “They evoke the imagery of Arp, Miro, Matisse, and other modernists who have informed my work,” she explains, citing Picasso’s ownership of a replica of the Venus of Lespuge.

Kavanagh brings to a point of convergence the natural object perceived as art and the human-made object as natural form in a way that is almost symbiotic. Transitioning from natural inspiration to artistic shaping, the sculptor underscores a formal correspondence in which the curves and roundness of each is enhanced. She made the shells and figures larger than actual size to enhance the formal relationship between the natural and human-made. By increasing the scale, she assigns a shrine-like quality to the female form occupying the luminescent shell, thus invoking the goddess or Great Mother tradition. For Kavanagh, the ocean also symbolizes the Great Mother, so seashells would express or embody female energy. Beginning with the collective and personal iconography in addition to formal tradition, the sculptor enters into a process based on how she feels carving goddess and shell.

In Kavanagh’s Willendorf, she combines the most famous Upper Paleolithic sculpture with perhaps the most iconic seashell of our age. The Ice Age “Venus” resides in an elongated pod reminiscent of a Henry Moore sculpted helmet, a curl bronzed lip of the Nautilus shell form protecting and emulating her belly. Moore himself recommended that an artist seek “principles of form and rhythm” from objects such as shells. Often identified with the Fibonacci sequence, the Nautilus shell in Kavanagh’s sculpture is not a spiral but a casing of implied circular shapes that are a counterpoint — one concave, one convex — to the rounded forms of the goddess. The rhythmic play is quite different from that of the “corkscrew” cascades of Lespugue. The sculptor further distinguishes the rough surface of the limestone carving with the polished patina of the iconic Nautilus so that her Willendorf figure seems like a mysterious primal presence in its shadowy interior.

Rather than abstract each goddess figure and assimilate it into its shell, Kavanagh deliberately maintained its configuration. Each stands as an archetype in which the sculptor participated in a kind of dialogue with Upper Paleolithic carvers. She comes to understand their shapes and even their energy through hands-on making. Both shell and goddess are sinuous and sensual. Conceived as opening and enclosing, the streamlined shells are embellished with grooves and indentations, encouraging the viewer to follow their forms in the round, while this sense of movement is countered by insistent yet irregular frontal outlines.

In contrast, the goddess figures possess mass, while the mounds and folds of the shells embody schemes of lines and curves three-dimensionally. In her previous series of pteropod sculptures, the tiny organism served as a messenger from the depths of the oceans. The goddess figures are like Ice Age messengers from a distant time in which humans were not separated from nature. Struggling to survive in a glacier-covered landscape, our species had a sustained explosion of creativity amidst extremes of climate change and harsh living conditions. Faced with our own planetary challenges, can our overdeveloped societies draw upon the aesthetic impulse? Perhaps our ability to still find wonder in a shell is a hopeful sign that not all is lost. 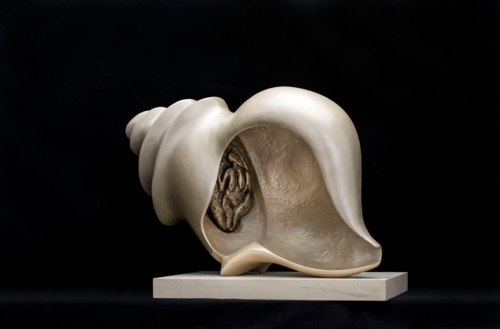 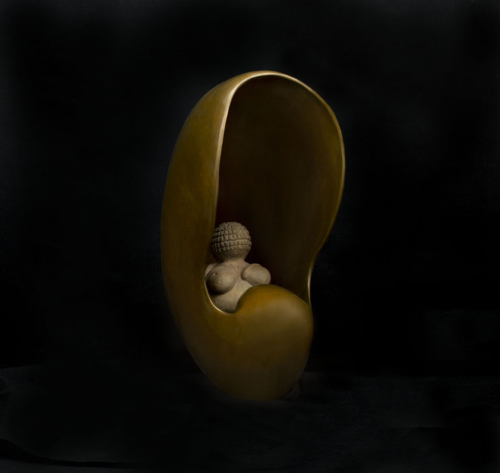 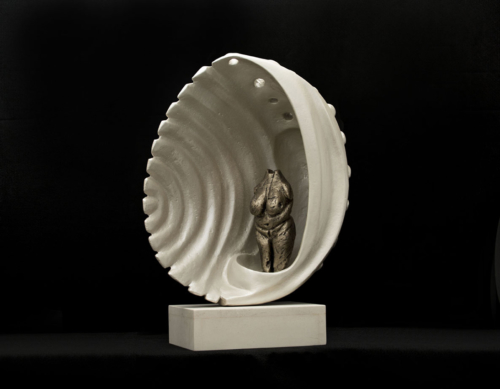 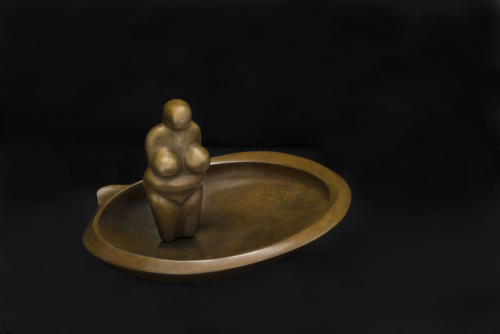 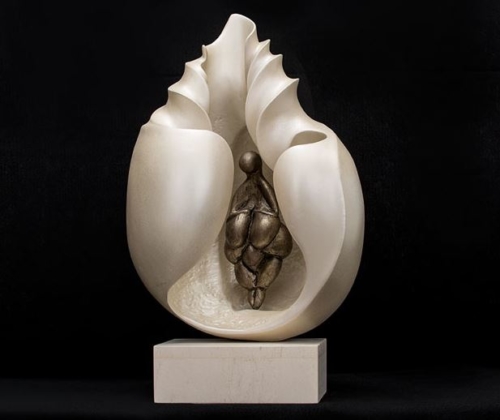