Elmer Schooley doesn’t paint landscapes — he paints nature. In a landscape, the elements are arranged like characters on a stage, forced into a man-made order. Rather than render outward appearance, Schooley reveals the harmony of natural principles. In his ninth decade, this artist perceives nature in its infinite variety and expresses the unity of organic forms. He simply states, “I am part of nature,”

Born in Kansas in 1916, Schooley grew up in Oklahoma. Fueled by the Western tales of Zane Grey, he wanted to run away and become a cowboy; drawing cartoons and movie characters fed his fantasies. Because of an ailing father, he, his mother, and three brothers worked odd jobs. Finally his mother opened a boarding house in the college town of Boulder, Colorado, where he began his formal art studies.

Attending the University of Colorado, Schooley took semesters off to drive a truck for the WPA. While earning money as a nude model, he met Gussie du Jardin, a fellow art student. In 1941, they married and set off for graduate studies at the University of Iowa. After serving in the Air Force in World War II, Schooley, along with his wife and sons, moved to Silver City, New Mexico, to take a college teaching job. In 1947, he accepted a position at New Mexico Highlands University in Las Vegas Mexico, where he taught for thirty years.

A hardworking faculty member, Schooley set up a lithography studio and an art history library, both labors of love. In recognition, the university president sent him east to visit the established art meccas. Abstract expressionism was the rage in the 1950s, but independent-minded Schooley found inspiration in a tiny canvas by the modernist French painter, Pierre Bonnard. In 1965, he got funding for a trip to the Chicago Art Institute to see a traveling Bonnard show.

Schooley’s education had grounded him in the Renaissance tradition of mathematical perspective and idealized drawing, in which outline articulates objects in space. Bonnard’s artistic style offered an alternative world made up of color and light. Eliminating modeling, Schooley began to use oils of varying hue and intensity, building the surface of a canvas with layers of paint.

Montezuma, New Mexico, however, is not a Parisian suburb nor the Côte d’Azur. Schooley’s milieu was the aspen-lined canyons of northern New Mexico and the alpine tundra of southern Colorado. There he and Gussie spent days photographing and identifying wildflowers. His macro lens enlarged the details of botanical structure, unveiling glorious works of art in the tiniest resilient blossom. In the big spaces of the West, Schooley trained an eagle’s eye on the specificity and variation of its plant life. His attentiveness to the minute and the particular led him to a further break from traditional composition.

At the age of fifty-four, he initiated his “Wilderness Series,” working directly on the canvas with no preliminary drawing. He decided to make a painting of aspens in which all elements were treated equally without focus or framing. Since the Renaissance, the diminution of forms suggested a recession of the scene into the distance; and an implied viewer stood at a fixed point outside the painting. Without a point of convergence, Schooley‘s fabric-like designs provide a view of nature separate from our domination.

“I don’t paint the picturesque,” Schooley says emphatically. When landscape painting originated, artists developed a formula determined by abstract proportion. Trees, rivers, and mountains were arranged almost like a table setting. Even as landscapes became more impressionistic, this format was used as a point of departure. Rather than stereotypical postcard scenes of the Great Outdoors, Schooley strives for authenticity in which the painting “feels like Nature.” The artist must be challenged by confronting each painting as a “new problem.”

After Elmer’s retirement, the Schooleys assumed positions in the artist-in-residence program in Roswell, New Mexico, and they have made this their home base ever since. As the art world discovered his unique style, Schooley achieved commercial success, which allowed him to build a studio exactly suited to his needs. Two easels are built into the wall, and equipment allows him to sit down and to reach the top of his large canvases.

Schooley often works on several paintings at the same time, completing only a few each year. Schooley avoids what he calls the “dreadful flourish of the brush,” developing a system of rollers and sponges to apply the paint. “The brush is the least of my weapons.” He meticulously works with pure oil paint to build a surface. Richly textured with varying strokes of paint, his canvases have the quality of natural processes, like the dense undergrowth of a forest. Considering himself a craftsman, he pursues a goal of a “good solid unity” as he enters into the web of paint marks.

The painting on the cover, In The Gloaming, was inspired by the view from Schooley’s own yard, where irrigation water sustains a stand of pecan trees. The large painting (72” x 80”) is filled with a continuous row of silhouetted trees, reminiscent of the tracery windows of a Gothic cathedral. Spreading out from the trunks are parallels of branching, streaming water. Reaching towards the light, each slender tree is unique yet enters into a relationship with the others, and the groupings have a steady rhythmic flow. A shock of yellow coursing across the picture plane like a lightening flash and the red-orange leaves that flicker like confetti contrast with the trees’ vertical pulses.

Living in chaotic times, Schooley reminds us that there is an order not of our making. Observe water spinning as it goes down the drain, and you see the spiraling form of galaxies. The capillary trees of In The Gloaming are consistent with the organization of our blood vessels. Although his paintings may arouse a feeling of spirituality, he claims to be a “carnal animal,” for truly he experiences the wonder of this planet through his keen senses. “Nature is my god,” he states plainly. 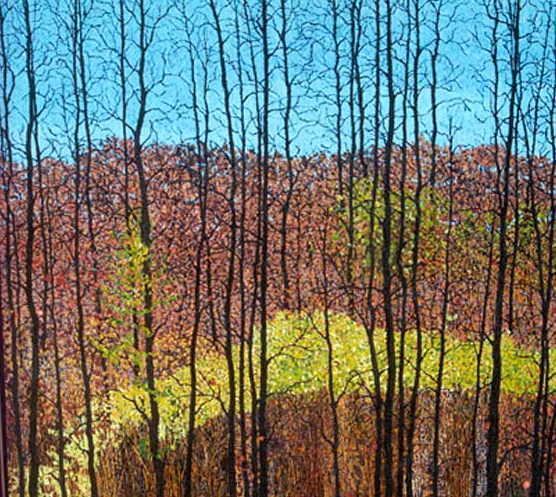