As a youth, Fernando Osorio Zumarán became friends with Wassily Kandinsky and Paul Klee. Along with Piet Mondrian, Rene Magritte, and Joan Miro, these artists were modernist masters encountered in the high school senior’s textbook and not in-person. Seeking to convey unseen spiritual and psychological truths, these men spoke to him with a non-verbal language of symbols, colors, lines, and forms. Living in the South American metropolis of Lima, Peru, Zumarán needed no interpreter or formal introduction, feeling an instant camaraderie that would always be readily available.

Through this immediacy with faraway artists, he sensed that culture was not rarefied but “something vibrant and alive” to which he and everyday people could lay claim. Zumarán’s sudden insight that art could be inclusive and accessible was kindled by his sense of self as a social being. Walking city streets, he began to write poetic responses to what he saw and experienced, wanting to share his aesthetic perception of reality with others. Yet paternal influence led Zumarán to engineering studies, which the young idealist believed would allow him to improve the lives of others through rural planning — an aspiration bound up with childhood memories of living in mountainous Andean communities. So for a time, this poetic soul’s hope for a better world hinged on science, mathematics, and technology.

What for others might have been existential conflict became a creative core for Zumarán. He appreciated the presence of numbers, geometry, and order behind the material world as well as the elegance of mathematical solutions. Playing with foundational building-blocks of drawing, color, and design, Kandinsky and Klee had revealed to him that art could make the invisible visible, each artist devising systems of making and expression that combined function with fancy, logic with imagination. As languages, both the scientific and the artistic allow conceptualization through abstractions and symbols that can be combined and become increasingly complex. As his professional life as an educator advanced, Zumarán also made a place for developing his artistic practice.

Working creatively within both linear and associative modes of symbolic thought, he understood that these were complementary means to describe or translate objective and subjective aspects of experience. Immigrating to the States in the late 80s, Zumarán had to communicate in a language other than his native Spanish, living in Virginia in a social and physical environment distinct from his homeland. He became more convinced that visual art was a bridge across divides that separate people. Keenly aware of the construction of cultural systems by which we create meaning, including language, he was drawn to those universal things that we share beyond distinct lexicons and grammar.

Zumarán’s canvases are made up of lines and forms that in varying degree reference technical-drawing tools commingling with those that read as hand-drawn or torn. Sometimes the former have the sharpness achieved by a protractor or a straight edge, but in some instances these are rendered like freehand sketches or writing. The artist repeats elements in a way to imply sequence, but the irregularities and arbitrariness of arrangement and directional placement defies a simple pattern. The inclusion of singular and more random components suggest that the complete sequence might extend beyond the frame, as does the implied cropping at the composition’s edges. Foreground and background never settle into position, as colors advance and recede, positive and negative spaces alternate, and lines refuse to identify themselves as simple line or as outlines.

While color assists in creating spatial ambiguity, there is a correlation between individual hues and specific forms. The mental tendency to seek continuity leads one to see a seemingly interrupted color as belonging to one shape, and Zumarán’s use of familiar geometric shapes can also lead the viewer on. Yet any determination of what goes with what is initially overridden by the artist’s eye-catching color choices. His clarion hues are declarations unto themselves, while variant shades are more metaphoric and syntactical. With high-altitude clarity, Zumarán’s palette partakes of his memories of Peru: teal, pink, and sky blue of the seaside and tropical climes; tawny yellow, mustard, and ochre of dry earth and adobe; and the saturated colors of Andean dyed wools. Reasoning gives way to what the artist refers to as “heart, senses, and soul.”

The shapes that populate Zumaran’s canvases are graphical, often derived from mathematics or alluding to prehistoric or indigenous pictograms. In his combinations, the artist works with the binary opposition of straight lines and curves, which integrates different non-verbal language systems into one field of operation. As daily communication increasingly becomes pictorial as with emojis, the inclusion of ancient symbols seems less a quotation from the past and more a manifestation of a shared human impulse across time and space — a yearning for deep meaning. Zumaran’s flat shapes are recognized as symbols, such that his more erratic configurations gain import by contrast and interaction. For the artist, this is a “world in which intuition takes center stage” to which each viewer can add his or her interpretation. Tapping into a different realm, viewers can gain an awareness of the spiritual dimension of their being, which Zumarán believes is the essence of the aesthetic.

Through daily meditation, he has come to feel an interconnectivity beyond appearance of all things and all life. A symbol that seems to hold special meaning for him is the spiral, a fundamental form in nature from the microscopic to the macroscopic that for many signifies the way of all things. Found throughout the world, it is among the earliest and most long-lasting embodiments of spiritual wisdom and religious belief, maintaining its currency as part of empirical observation of organic and cosmological phenomena as well as theories of consciousness. Addressing his interest in the spiral, Zumarán touches upon how it portrays the creative force: “The spiral for me is the origin of the universe, of sentient beings of stars. It is our connection with the mother, with birth, and also the development of anything toward the infinite.”

In his paintings, Zumarán includes seeming oppositions or contrasts of logic and emotion, designed and intuitive, intellectual and sensual, which, upon consideration, are more a matter of changing perspectives along a continuum — just as points on a spiral are part of a cycle, just as the points on his path as a scientist and an artist. Now devoting himself full-time to his art, the turn he is taking is one in which the planner cedes control to the process of painting itself, letting hard edges surrender to more free-form elements with less insistence on boundaries. He has caught up with himself. Expanding beyond givens and expectations of what can be known or experienced has always been Zumarán’s driving force, the center ever becoming the circumference. 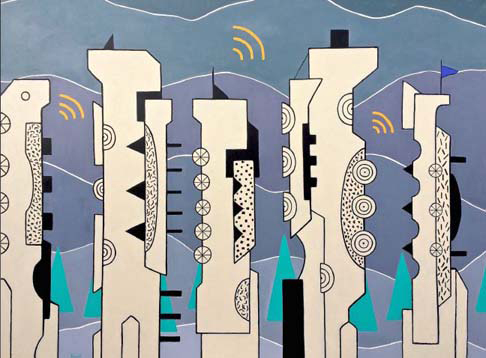 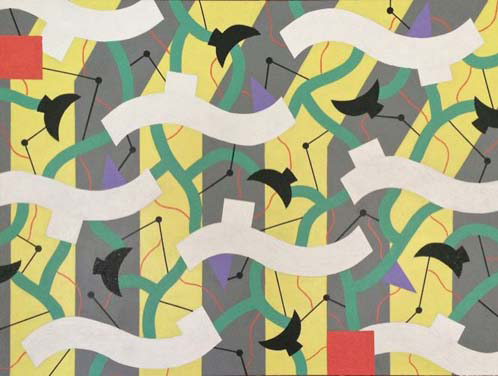 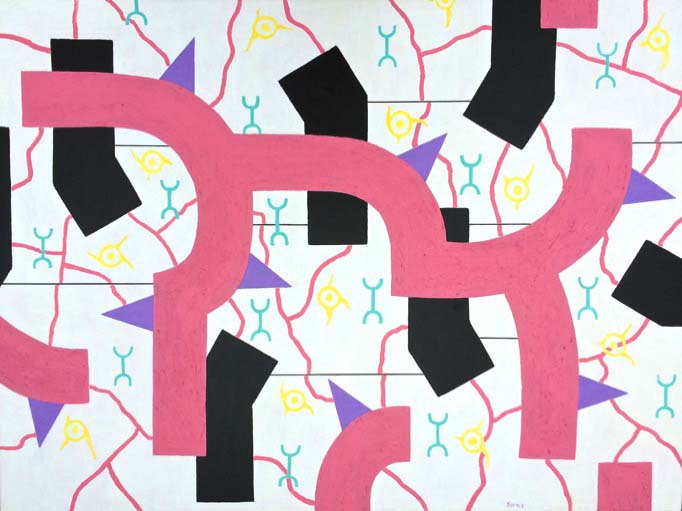 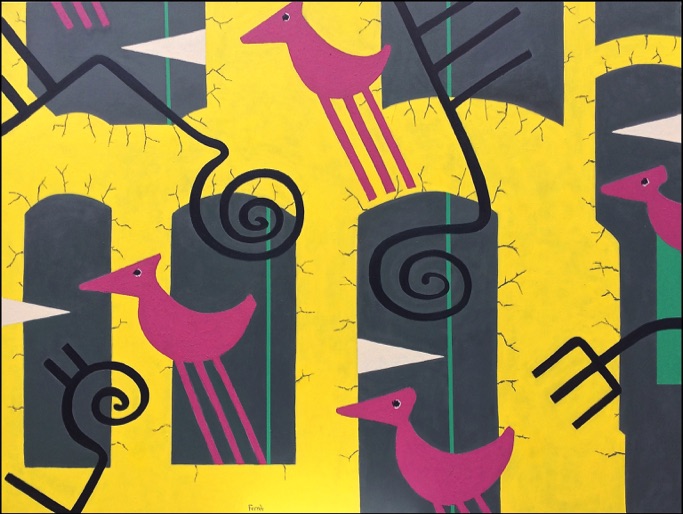