When we speak of realism in art, we usually assume that the real that is reflected is singular: there is a world out there in which we live that an artist sees and renders. Yet quantum physicists propose the existence of multiverses, with string-theory hypotheses that radically redefine the nature of reality. As much drawing upon the imagination as mathematics and astronomical data, their conjectures have elicited artistic responses to suggest what this mind-bending cosmic map might look like. Painter Josef-Peter Roemer isn’t interested in painting landscapes of any sort, even ones that set forth an expanding universe of multiple dimensions and parallel worlds. Nonetheless, his figurative montages teeming with incongruities and heterogeneous imagery suggest an alternative to fixed determinants within Euclidean space.

Roemer’s paintings are not visualizations or illustrations subservient to science. It’s more a matter that multiverses are not abstract concepts for the artist, who accepts the implication of Albert Einstein’s assertion: “The distinction between past, present, and future is only an illusion.” His overall compositions are jam-packed with elements that mark different places and times in his life with his consciousness as the nexus. While there may be a hint of a background and perspectival lines, these are almost there to be defied, as his mixture of exotic, ordinary, foreign, erotic, historical, actual, and archetypal snippets are scarcely contained. Assuming a panoramic point of view, Roemer puts figures where he can fit them in with scale being of no importance. His bright-colored, phantasmagoric concoctions push forward to the picture plane, creating a relationship between the two-dimensional and the three-dimensional that allows for yet more.

The artist’s own biographical mélange may have framed his understanding of a multitudinous actuality. Born in the former German Democratic Republic, Roemer was raised by his grandparents. At a time when an innocent German boy might be called a Nazi, he was brought to the United States by his mother, who had married an Arapahoe Indian stationed as a GI in Germany. Already a bit of a loner, Roemer amassed a collection of immersive life experiences that often set him apart: serving as a Marine in Vietnam, learning karate in Okinawa, studying fine art at hippie-haven Evergreen College, running a prefab concrete company, working as an animator for PBS children’s shows, returning to live in Germany for ten years, and most recently settling in rural Wisconsin. It is as if he has never ceased being an immigrant traveling through different worlds.

With art as his constant, Roemer describes himself as a busy person who can’t sit still, stating “I have ants in the pants.” Equally busy, his artistic influences share a manner of composing without a single focal point in which constituent parts overwhelm the whole. Part of the pleasure for the viewer may be picking through all the details, with no particular place for the eye to land. Drawn to portraiture, Roemer names Hans Holbein as a favorite, and the 16th-century artist is known for his assiduous accounting of features that exceeds ordinary vision. Indeed, there is something anachronistic in the suggestion of late-medieval or Northern Renaissance pictorial space in Roemer’s art. For all we know, he might be occupying a painter’s workshop in Tournai or Bruges centuries ago in linear time.

Roemer grants special status for two 20th-century American artists, Thomas Hart Benton and Jack Levine. In his sweeping, energetic murals, Benton elevated scenes of Americana to mythic levels, which may account in part for the allure to the German-born artist. The Midwestern master provided a model for splicing together individual vignettes and weaving formal relationships rippling through the entire picture — a sense of movement created with lines, modeling, and color. In terms of outlook, however, Roemer has more affinity with Jack Levine, who combined aesthetic exuberance with piquant political and social commentary. Levine populated his eruptive, cluttered compositions with larger-than-life caricatures of the corrupt and pompous. Not one to suffer fools gladly himself, Roemer has developed a hurly-burly aesthetic to embody his own absurdist sensibility, honed by variable cultural distance. “If a painting doesn’t say anything, why bother?” says Roemer categorically.

Often taking inspiration from dreams, the artist may know what his unexpected, but not arbitrary, components may signify and how they interconnect, but he prefers not to give away specifics lest they squelch interpretation. Tangling with his own inner workings, Roemer prefers that each viewer stitch together their own meaning. When he starts a painting, he may have something in mind; but he makes no drawings, which is extraordinary given how complex his conglomerations are. Playing with dissonance and reiteration, the wily painter threads together graphic and fine art traditions while mixing light sources and perspective, with a capacity to previsualize the patterned effects of his two-dimensional renderings. What is one to make of Indian warriors floating in the sky along with a busty waitress across a diner counter from two Vietcong? Or an iconic Eddie Adams photograph of a Saigon execution in the manner of Gauguin set against a staircase where a cuddly white cat stands looking out at the viewer? Are any of these really any more bizarre than what one can find on Facebook, YouTube, or click-baiting aggregators on any given day?

In his paintings, the artist often places himself at various stages of his life. Naked as Adam and with a Mona Lisa smile, he emerges from a portal, without the rest of his body in sight beyond its frame. A wild-haired Roemer appears out of thin air and stares enigmatically off into another space, as he grasps the portal frame that becomes or was an hazelnut tree — passing from one state of being to another. His hectic scenes include windows, mirrors, and other means of puncturing the depicted space to imply that what might seem delimited actually extends beyond. More visionary than visual, even the intensity of his lush colors wants to stretch the gamut beyond which the eye can see. With his creative intelligence, Roemer can wander freely without material or chronological restraints from universe to universe, observing the ludicrous and irrational within our own. 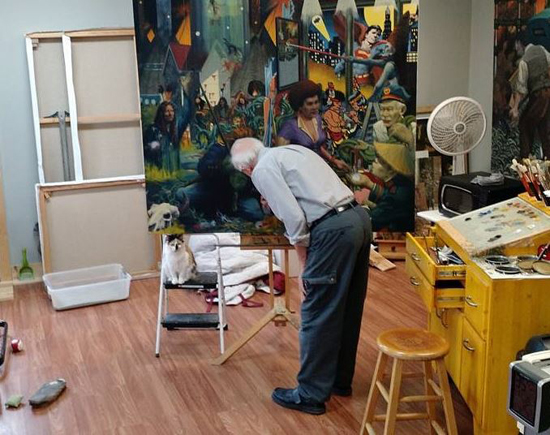 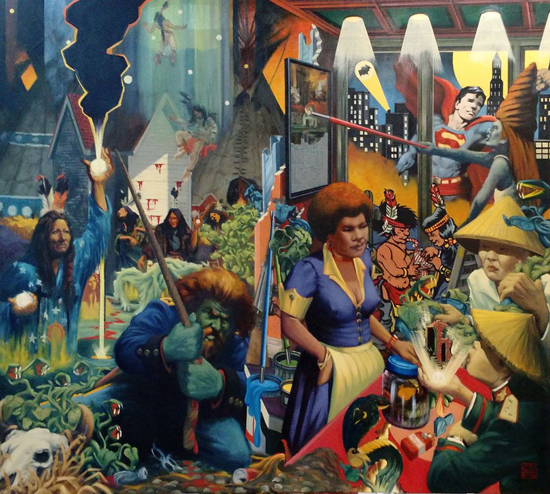 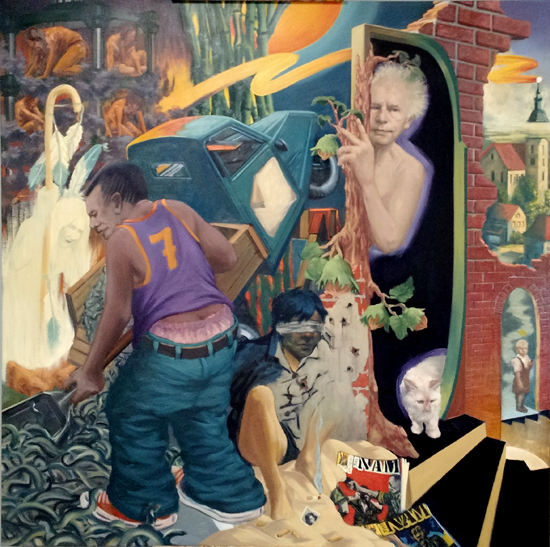 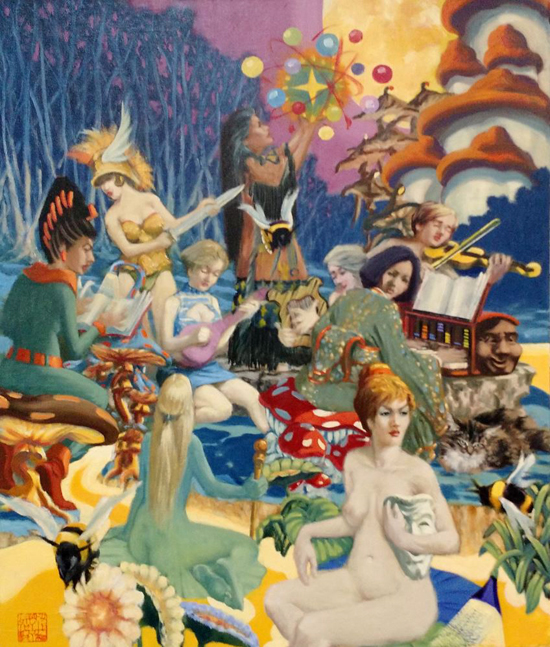