Crossing The Divide:
The Muses, Guides and Entities of Lance Green

Lance Green’s grandfather was a mountain man, and his grandmother painted china. For the boy who grew up to be an artist, his nurturing elders were skilled in practiced techniques that took him out of his mundane world. He learned equally from what was then masculine and feminine domains about the force of nature and the power of art: connecting to the land and its creatures in an elemental and primal way; observing the nuances of pattern and paint to transform the ordinary into the extraordinary.

This yin/yang experience of childhood characterizes Green’s subject matter and style. His personal history is made up of strong men and oppressed or repressed women, which has an outlet in repeated pictorial themes. His approach to painting is a combination of crudeness and delicacy, in which one quality includes the other: his subtleties are bold, and his rawness is tender. Placing his subjects on a mythic plane, Green creates formal paradoxes that resolve or undercut the tension between opposites.

To put right differences becomes a healing process, which is a fundamental component of Green’s intent. He cites the abstract expressionist Mark Rothko’s claim that he couldn’t paint unless he knew his work healed people. Reflecting on his own process, Green says spiritedly, “I know it heals me — so let’s hope I pass some of that energy on.”

When he was seven Green’s father left his mother, and eventually son, mother, and step-father would live in East Los Angeles. The artist describes a very troubled home environment, in which his mother never went anywhere. The one exception was when she accompanied him on his surfing expeditions. Standing on the beach, she would gaze at the ocean, which became her “one point of ecstasy.”  As an artist now, he tries to capture that same awakening: “If there is a particular subject that I address it would be a release for repressed or oppressed people.”

Years later he met the artist Fritz Scholder on the very day of his mother’s funeral. Working as a graphic artist, Green’s encounter with the older artist stirred his emerging ambition to apply his talent to something more profound than commercial display. The following decade he persuaded to Scholder to provide instruction. Even though the master had abandoned teaching workshops, he brought Green into “the brotherhood of shaman artists.”

We are accustomed to looking at artworks in terms of the relationship of content and composition. In centuries past, paintings and sculptures were often endowed with a potency or life. The very origins of art in cave drawings or carved effigies is based in animism: instilling a life force into an object. While Greek statues are now seen as white marble shapes, they were once brightly painted and consecrated to house souls. Even early Renaissance painters used materials, such as lapis lazuli, which were believed to have mystical power.

Connecting with art at that level, Green works in a manner that emulates the shaman’s journey. “Somehow I need to get lost — pretty much lose the whole painting, and from that near-ruin bring it back to the state where it can be redeemed.” Rather than a likeness, Green selects a figure that he distills to its essence. This is a jumping-off point into his additive process of applying color layers randomly and intuitively — reaching into a deeper consciousness.  Without a fixed representation in mind, the artist knows he is finished when he recognizes another “entity” in front of him.

In The Sky about To Rain, the central figure is a woman holding out her hand and raising her head to feel if rain is falling. The triangular shape of her feet and the upright column of lower leg tells us that she is firmly planted on the ground. Her tilted head is in alignment with the column of her leg. Rigidity is reinforced by the straight line of the front of her garment, but her body movement initiates a kind of unfolding in the jagged arch of her back.

Simultaneously there is a reaching and a balancing of both the female symbol and of the artist’s actions. She extends her arm, and her body must respond with a counterweight. Green paints a patterned, snake-like arm, which is counterbalanced by the specter-like shadow below. She wears a dress whose indigo alternates spatially with the surrounding mustardy yellow and saffron punctuated by orange.

What truly liberates the image is color. Green usually sketches out a rough-hewn form. Abandoning the pantone correctness of his graphic arts days, he seeks rich, evocative colors that emerge from building up layers, and he finds the beauty in the unexpected. In looking at nature, a sensitive eye can detect in a simple green a tapestry of seemingly infinite colors. The composition of a forest isn’t laid out with evenly balanced tones from a color wheel.

Traditionally color is the element of art that is emotive and temporal. Green tends toward colors and their combinations that intensify the feeling of exhilaration, exaltation, and enchantment. The artist likes juxtaposing complementary colors, which tends to make each color resonate,  but the selection of the specific red-green, yellow-purple, or blue-orange is surprising. What could have been standardized has an edgy eloquence, as the artist reaches for that perfect imperfect note.

While his harmonies are daring, his color detailing is sensitively complex. What initially appears to be a single color may consist of thirty layers, and the partially concealed underpainting is meditative and mysterious. Close examination reveals intricate designs in which a tiny dot seems like a jewel. Borders and edges vibrate, as bands of color suggest light itself. Even white is never an absence of color. Green’s intuitive work is based on thorough knowledge, which allows for the transformation of materials into something transcendent.

As an Anglo in East L.A., Green absorbed the brilliant palette of Chicano artists and was drawn to the vibrant displays of muralists. Attuned to a world of color, the artist has become increasingly sensitized to the energetics of light. Analyzing any object or person, he sees a dazzling array of reflected color, so that a face pulses with prismatic hues. In his paintings, he establishes a strong contrast of positive and negative space, but the resulting field is never empty. The figure resides in or commingles with a kind of force field, which extends to the viewer who may feel the physical and emotional impact of color.

Ultimately it is his empathic ability that allows Green to engender his paintings with this life force. Working at his studio in Palmer Lake, Colorado, his muse is his wife, who has multiple sclerosis and of whom he speaks with devotion and admiration. For Green, her capacity to rise above her disease manifests the feminine quality of strength — of triumphing over whatever may be holding women down physically, socially, or politically.

Yet somewhere in his vocabulary of figures of women flying or dancing, in his figures of cowboys and Indians, and in his figures of animals is the artist’s own spirit. Green opens himself to his vulnerability and becomes the artist-as-healer. Embracing his own psychological and cultural dualities, he guides us to another realm beyond divisiveness where we can become whole. 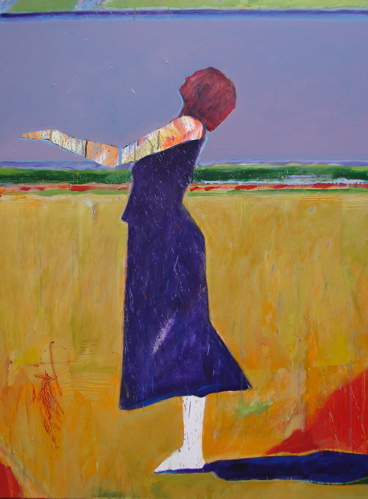