The mind can envision what the eyes do not see. A friend may say “picture this,” and we take ourselves to places and situations that we have not visited nor experienced. Artists give us pleasure by conjuring up scenes both fantastic and real, extending our physical boundaries through the power of imagination. This capacity to look with the mind’s eye has been the saving grace for the artist Loretta Allaire, who has moved beyond personal grief to glory.

It’s not hard to imagine the spirited young girl growing up in Brockton, Massachusetts, where her father was one of the many Italian immigrants laboring in its shoe factories. With an artistic ability yet unambitious, Allaire married soon after high school. Her husband Dick knew she loved art and presented her with her first art set, which she still owns and treasures. However, the blissful couple had four babies in five years, leaving Allaire little time to learn how to use the tubes of oil paint.

In the late 1960s, the family moved to Connecticut. By leaving the family and friends she had always known, Allaire began to look beyond the familiar. Encouraged by her husband, she started going to art shows “like crazy” and enrolled at Western Connecticut State College.

In the middle of her studies, the family once again relocated. Rather than interrupting her studies, the move to Denver meant that she could major in art at the University of Colorado. With a B.F.A. in hand, at the age of 40 Allaire landed a high school teaching job. Loving teenagers, she provided them with a place to find creative expression, through her gentle guidance and good humor; and yet her own art took a back seat.

Satisfied with a life well-made, Loretta had to face the loss of her beloved husband in 1990. This man and woman were a true partnership. For Allaire, her devoted husband had helped her “grow up”; and now as they were to walk into their golden years, he was no longer at her side. Sad and empty, she took a roadtrip the following summer and used her art-making as a means to work through her feelings.

Her artistic life became a vehicle to fashion a new existence. “Art gives me a feeling like I get from nothing else,” she states emphatically, “…a healthy mind-feeling.” By tapping into these feelings, she was able to transcend her dark days of depression and fear. Allaire used the comfort zone of art schools and workshops to travel by herself, a strategy she encourages other women to adopt. She made her big artistic breakthrough when attending a program at the Vermont School of Art. Upon being prodded for being too timid, at the age of 60 she responded with a new freedom, and her painting had a self-assurance hitherto unseen.

With increasing confidence, Allaire traveled to Europe, taking classes at the International School of Art in Umbria, Italy. Befriending two younger women, she set out in search of a house in Spain that they could share. This enterprise resulted in her own stay in a studio space shared with four other artists, where she could be alone with her art.

From this period emerged a series of small paintings that she refers to as her “little gems.” For Allaire this isolated Spanish countryside was a virtual Garden of Eden: mountains stopped just fifteen miles from the sea, and inbetween were undulating hills and valleys filled with orderly gardens. The very smells of this fertile place were laid down on canvas with vibrant colors. Contained within a small canvas, her depictions of pink grapevines, golden trees, and pale green fields became more abstract, capturing the energy the artist experienced. These paintings are so forceful, because they are a declaration that the artist has chosen Life.

At the end of her stay, she went to Italy to meet one of her young artist friends, who had suggested they both take a printmaking class in Rome. Waiting for the session to begin, they traveled to Naples and the nearby resort of Amalfi. While strolling on the beach, Allaire met Antonio, a retired doctor who was also an accomplished artist. The two have been companions ever since. Now she spends part of the year in Colorado and part in Amalfi and in Trento.

A constant in Allaire’s work is her fascination with the accidental and with hidden images. Consider the delight in recognizing objects in the clouds or seeing the “man” in the moon. Such suggestive forms leave room for the individual imagination and provide the source for aesthetic play. In his treatises, Leonardo da Vinci encouraged painters to look at the rough surface of a wall and find “landscapes, battles, clouds, uncommon attitudes, humorous faces, draperies.” With Allaire’s skillful touch, what may seem like an idle flick of paint turns into a hillside village.

In the painting on the cover, Duomo Piazza, Trento, Allaire depicts the domestic architecture of the main square of Trent, a city in northern Italy surrounded by the Dolomites. Geographically situated in the Alps, Trent is a unique university town shaped by the commingling of Italian and German cultures. Although the color of the buildings is true, the artist has achieved luminosity through the layering of oils, giving the scene an almost fairy-tale quality. The chimneys and the arches suggest perspective, and yet the windows seem to vibrate or dance. Above, the green-blue paint gives dimension to the mountain and also seems like icing on a cake. Mastery of paint masquerades as childlike gusto.

Asked about her facility with the Italian language, Allaire laughs and says that she is not fluent but is “making progress.” Now in her 70s, she has been able to “see” beyond her sorrow and to create an exciting life full of new challenges. Steadily blossoming, she thanks her art for bringing her through tough times, and it is this woman’s vivacity which has made her art so inviting. 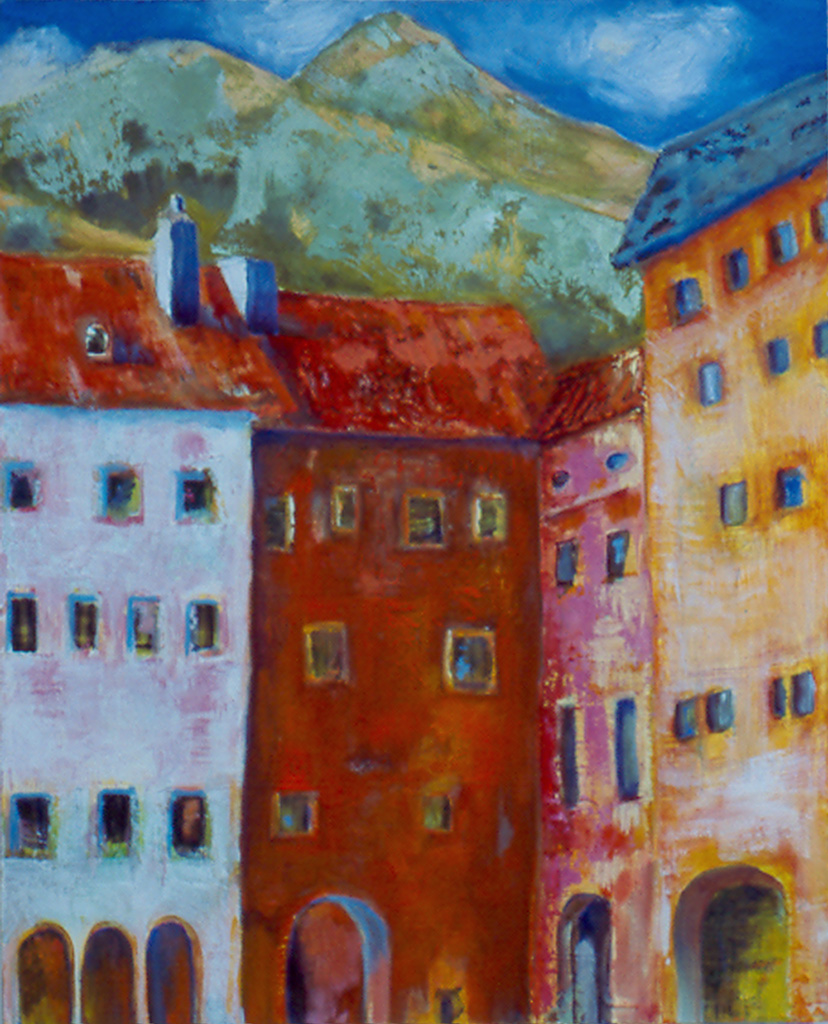