Hidden in Plain Sight:
The Patterns of Maud Gatewood’s Life and Art

Young Maud could step out the front door into the town, where her father was sheriff; or she could go out the back door into fields of tobacco that her father grew. This small-town agrarian setting nurtured the free spirit in this precocious only child, who warned her prospective first-grade teacher, “Get ready! I’m coming!” Although her mother “expected a Southern belle,” both parents encouraged the individuality of a pig-tailed girl who was drawing the Lone Ranger and Tonto at age six.

When Gatewood began Saturday art classes at Averett College in Danville, Virginia, the ten-year old said, “Well I’m going to be an artist.” Skipping two years of school, she entered Woman’s College of North Carolina, which had an art program with visiting avant-garde artists. Forsaking bohemia, Gatewood planned to make art a secure livelihood by teaching and went to Ohio State for a masters in painting. After living in Alabama and Texas, Gatewood returned to North Carolina in 1964 to teach, eventually landing at Averett College.

In the early ‘60s a Fulbright grant allowed Gatewood to study art and art history in Austria. In the dead of winter, she was at a small Alpine ski resort, when in walked a tall bearded man who had seen better days. While drawing his portrait, Gatewood carried on a conversation in German with this weathered character, who told her “I have failed at more things than most men have tried.” — words which still resonate in her adventurous heart.

Gatewood has journeyed far from her provincial origins to see the variety of human custom. The countries listed in her itineraries comprise a mini-Atlas, with much of her travel to places off the beaten path such as Siberia, Indonesia, or Mozambique. “You get away from your environment and see it better,” Gatewood says of the experiential “shift” which travel affords.

Questioned about her trip to Botswana, she says it was without incident, adding with a twinkle: “I pick my places between upheavals.” Gatewood has been to Iran twice, with the second tour after the country was re-opened to Americans. Wearing the traditional shador, she mingled with young Persians at a restaurant, learning of their fondness for our culture. Awakened by the sound of pots and pans clattering in India, she looked out her window to see a “living scarecrow” screaming in a cherry orchard. Rather than rely on second-hand accounts, she likes to see things for herself.

Visually she is drawn to the patterns of human fabrication and of the land. In Mongolia, she was fascinated by the geometric designs ornamenting the yurts and by the emptiness of the Gobi; in Vienna, by the trimmed configurations of the formal gardens; and in the Himalayas, by the complex terrace system. Gatewood finds our humanness in our ability to problem solve. As examples, she cites the use of old tires to make buckets in Asia or to keep down the dust in Africa. “The world is all we’ve got.” she says resolutely.

Gatewood’s love of “shapes, forms, and patterns” is evident in the cover painting After Snow (72” x 48”). The artist depicts a dense forest of mottled trees.The irregular shapes of peeling bark, which look like animal skins, are echoed in the melting snow between trees. The artist contrasts flat patterns with three-dimensional volumes created by shading on the trees and by perspective. As our eye shifts back and forth from figure to ground, our mind tries to make sense of what we see.

Deceptively simple, the composition relies on the juxtaposition of straight and curved lines, prime elements of a universal visual language. Adjusting to the play of surface and depth, pattern and depth, color and tone, we realize that there is one tree that is different, a single dogwood. This is one of the “strange little things” she likes to add to create “intrigue.” Through this distinction, we suddenly notice the singularity of each tree.

As an artist, Gatewood likes the way snow “reduces the landscape into broader patterns” and introduces “subtle color.” She makes us take notice of a moment when the winter sun causes the snow to recede thus exposing the moist, rich soil beneath. In her unique vision, beauty is found in an interval most of us ignore.

Using memory to reduce and amplify, Gatewood employs an economy of means. “Every part is thought through” is the way she describes her method of working: a measured approach that is architectural. She says that she could have been an architect and has restored or built several residences. This constructive outlook informs her art production: “I like to make something — an entity to itself.”

Now almost 70 and living in Chapel Hill, Gatewood is pleased with the changes in North Carolina, which have brought more cultural opportunities, diversity, and good food. Having “done enough caretaking,” she lives in a condo-sized house and steps out the back door to her studio. Last year a theater group in Charlotte staged a performance based on her life and art, and currently the Oscar-winning director, David Kasper, is making a documentary about her.

Gatewood herself is unimpressed with the attention. Shunning the label “artist,” she likes think of herself as a painter. “You can be a con artist,” she says pointedly. Not one to look back, her days are occupied with new canvases, which get “bigger and bigger, and whiter and whiter.” Although the creative process may be more of a struggle, Gatewood knows that success lies in the effort. A celebration of the patterns of living, her minimalist art reminds us of the human effort to find order — to make this planet our home. 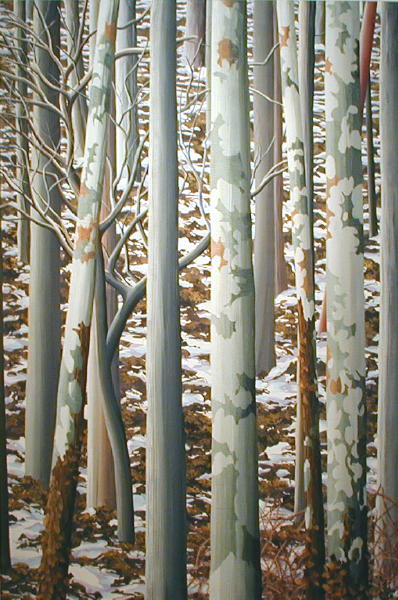