Standing expectantly before a primed canvas, Mimi Chen Ting makes her first mark. She draws a line on a pristine surface with a stick of charcoal and feels the congruent responsiveness of her hand, wrist, elbow, and shoulder. From this kinetic energy, Ting pushes off into a sequence of arcs, curves, geometric and biomorphic shapes, which serve as the foundation of her painting. The traces of her actions suggest such a euphoric release that it is little wonder the artist says succinctly, “I love beginnings.” Starting with that initial contact and building to more complex, ever-increasing interaction, Ting performs a painterly dance of emerging and being in the world.

Having studied both art forms in tandem, Ting brings the somatic sensibility of a dancer to her painting. Since the late nineteenth century, visual artists have turned to dance and dancers as subjects, due to the expressive possibilities of the body in motion: the way in which the human figure is subsumed into a dynamic composition or formalist construction paralleled the modern artist’s daring new enterprise. Yet aside from Mondrian’s ballroom dancing, artists drew upon dance as observers, emulators, and collaborators. Rather than approximate dance, Ting’s artworks emerge from her understanding of movement, position, direction, and attitude as communication.

Growing up in Hong Kong, Ting studied ballet as a young girl and loved going to the Chinese opera. This flamboyant centuries-old musical theater is known for colorful symbolic costumes, masks, and makeup of performers acting out elaborate tales with intricate gestures. Within a culture that favors repetition and refinement, Ting was equally fascinated watching similarly ritualized actions of her grandmother’s foot-washing and -binding. Settling in California’s Bay Area to attend college, Ting was liberated from her restrictive upbringing; but as she studied painting and took all the dancing classes she could, she eventually found a fecund outlet in performance art anchored in traditional practices as personally experienced. Through iteration and deliberateness, she had learned to value attentiveness and restraint.

In earlier work, her embodied awareness translated into stylized yet emphatically physical figures that convey states of mind or being. Distortions or exaggerations accentuate sensing, feeling, and knowing through the body, with emphasized hands and feet denoting a capacity for extension and for inhabiting space. After Ting stopped dancing, she let go of these surrogates and developed non-objective imagery and a one-on-one relationship with her canvases. Guided by experimentation in collage-inspired monotypes, she created rhythmic contours, cutout-like forms, and indeterminate, fluctuating spaces. In these animated configurations, color puts everything in motion, as hues and values come forth, recede, jostle, or resist.

Before long, Ting was highlighting the contingent and unstable qualities within the interplay of forms. Rather than fanciful scenarios, she created patterns of curving, undulating planes and bands of color that appear to unfold in an ongoing cycle or continuous flow. In Chinese opera, nuances of movement are based on the principle of roundness in which angles and straight lines are avoided; this quality now permeates her graceful curvilinear paths and resulting shapes —not movement in space but movement as space. Enhancing the interrelational, Ting creates dynamic systems that seem to behave and organize according to the generative mechanisms of our physical universe and of living organisms, of big bangs and flocking birds. The viewer empathically feels expansion within the welcoming void well beyond the rectangular dimensions of the painting.

In the late 80s, Ting established a residence in Taos, New Mexico. Having lived in high-density urban areas, this town situated between the Rio Grande Rift and the Sangre de Cristo Mountains came as a revelation, one she describes as “an out-of-body experience.” At home in the sweeping landscape bathed in a piercing, ever-shifting light, she awakened to the clarity of lines and shapes within seemingly boundless vistas. Already tending toward a minimalist aesthetic, Ting increasingly distilled her compositions to be sparer and more hard-edged. Having worked with mottled backgrounds, she transitioned to unified flatness that accommodates various permutations between positive and negative space, depth and surface, in what philosopher Suzanne Langer might have called “the familiar illusive pattern of sentience.”

Lithesome and tensile lines would simply skitter across the picture plane but for the artist’s considered selection of hue and value. Color is the ingredient that adds dimensional complexity and disequilibrium, as the viewer seeks coherence and harmony from the counterbalancing tonal weights and temperatures. Laying in paint, Ting changes her original design to become more mutable and open-ended. Rather than provide fixed parameters, firm contours concentrate and intensify each color and its effect. Ting adroitly determines the proportion and acrylic pigment of each component to activate a constant visual reshuffling, such that one reading supersedes the next. Chromatic interactions create the illusion of overlay and translucence, but individual color forms can also be seen as opaque, and the swing from one to the other — along with the bounce to and from positive and negative space — engenders a feeling of perpetual motion or passage from one set of conditions to another.

To achieve this pictorial range of motion, Ting accesses her advanced understanding of theory, but the fullness of color in her paintings exceeds any exercise in situation and correlation. Informed by her transcultural perspective, she has a captivating palette from which she devises striking combinations and arrangements, coaxing unexpected results from a frugal number of carefully prepared pigments. Ting’s astute choices come not solely from their position on the color wheel, and her inspired teaming of shades sets off the sumptuousness and vibrancy of each — as if seen for the first time. No hue plays a secondary or supportive role, which encourages the visual flux. Rather than look upon gray as neutral or drab, Ting prizes the hue for its resonance with the entire spectrum and lets it holds its own next to maroon or crimson. Often her imagination masquerades as logic, and the viewer accepts a vibrant pink seemingly produced by yellow and mint green transecting bands. Relying on the pure sensation of color rather than association, she imparts poetic feeling into her inexhaustible compositions. The reciprocity of plotting precision and delicious arbitrariness melds measure and intuition, bringing order to our entanglement with the world. 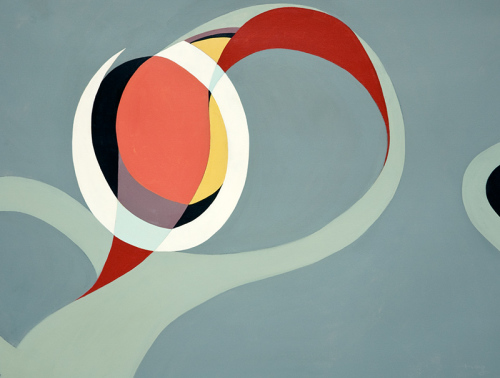 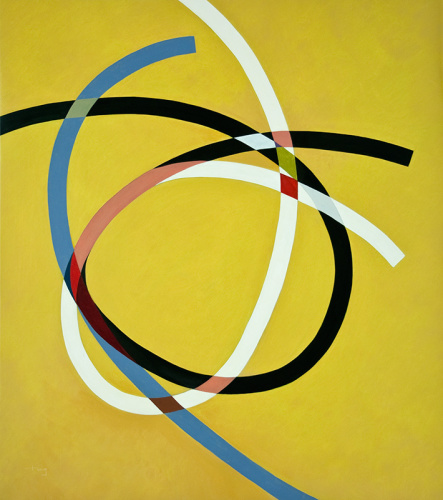 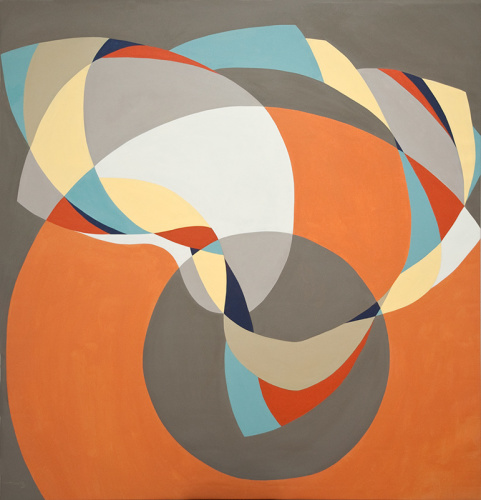 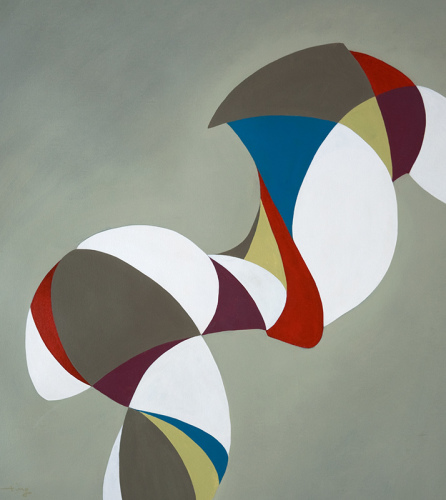