At the edge of the Great Plains just southwest of Denver, tilted sandstone monoliths bear evidence to millions of years of erosion and uplift of the ancestral Rocky Mountains. Amid these dramatic red-rock formations, Nadaleena Mirat Brettmann found a painter’s perch that corresponds to her own intensity and that feeds her fascination with the immense and overwhelming power of nature. A force to be reckoned with, the Croatian-born artist lives and works in Roxborough, Colorado, a place often visited by landscape painters and photographers but not the customary site for a studio.

Her aerie address, however, is hardly what makes her an artistic outlier. While many artists have posed nude in a life drawing class or for a friend, few can say they have been on the cover of Playboy – not once but twice. After her first appearance in 2001, someone gifted Nadaleena a generous sum in admiration of her beauty, for which she became famous as the “Six Million Dollar Playmate.” Ever since the Venus of Willendorf, artists have exalted the voluptuous female form; but now in an intriguing bit of role reversal, the model stands confidently behind the canvas. Drawing the figure since the age of five, Nadaleena could easily accept her own eroticized image, but the attention gained meant less than the secret pursuit of her own art. Challenging expectations and even raising a few eyebrows, in her mind she simply is fulfilling her creative destiny.

From her earliest effort, Nadaleena has given herself over to the human figure and face, and some might even perceive veiled suggestions or figural references within her more recent abstract work. With a precocious passion for Rembrandt, she became enamored of the elongated portraits and languorous reclining nudes of Modigliani. The influence of the idiosyncratic bohemian artist can be discerned in paintings such as Disconnect, which sold for a million dollars and was featured this year as part her one-evening, invitation-only gallery debut. In the inhibited brushwork, Nadaleena reveals herself to be an ardent disciple of de Kooning, who alone of the Abstract Expressionists upheld the figure as subject – if distorted – while pushing what he could do with paint.

In making the transition to non-figurative painting, she evokes the signature ferocity of de Kooning’s controversial Woman series, assertively wielding brush and palette knife with seeming abandon. While her brushwork always had panache, in her latest Twister series Nadaleena has stoked its expressive capacity, such that the frenzy of paint corresponds to the destructive storm. Whereas de Kooning conjures up a formidable archetype of female sexuality, the woman who could have served as his inspiration offers instead a feverish homage to Mother Nature.

Nature at its most extreme is a reminder of something greater than ourselves. When she was a little girl, Nadaleena was on a boat with her aunt and uncle when a life-threatening storm at sea engulfed them. She felt excitement within the chaos, while simultaneously intuiting the seriousness of the situation from the adults’ obvious fear. As often with highly charged childhood events, this became a vivid and visceral memory that Nadaleena still carries, providing the basis of her previous series In the Eye of the Croatian Storm. Instilling in her an awareness of life’s unpredictability and impermanence, she has often crossed paths with powerful storms and weather-inflicted disasters in her travels around the world, almost as if there is some fateful link.

With her striking canvases of red hot twisters, she gives the fury of the funnel cloud a volatile, apocalyptic presence in the Romantic tradition of painters such as Turner. In the Twister series, Nadaleena turns a weather phenomenon into a visionary spectacle. Developing out of thunderstorms, a column of air moving at super-high speeds descends to the ground, where the spiraling vortex ravages everything in its path. Nadaleena seizes the terrifying shape of a raging twister and intensifies its uncontrollable force with uninhibited brushstrokes and vibrant relentless hues. Working primarily with red pigments, she draws on associations with fire and blood, such that the swelling configuration looms in a flaming inferno. Characteristically a color that screams, red is juxtaposed with red – opulent mixes of alizarin, crimson, scarlet, vermilion, cadmium – in a way that is dizzying. Softer shades of pink and white only increase the pitch of the reds by contrast, and red-orange and flesh tones engender a disquieting feeling. Through color, Nadaleena has suggested the awful roar of the twister to a point of operatic extravagance.

Calling herself a “mad painter,” she embraces the irrational, spontaneous aspect of art – what Nietzsche deemed the Dionysian. Painted with such impulsive energy and quick movements, the wild, swirling tempests can be seen as Bacchic dances. Gashing black strokes punctuate the enveloping vortex yet also seem like rippling black streamers flung by ecstatic celebrants or orgiastic maenads. In Greek myth, snake-handling maenads, or “raving ones,” achieved intoxicated states and ritualistically tore animals and sometimes men to pieces. Taking the wooden tip of her brush, Nadaleena incises sinuous lines, so that the painter’s act of mark-making embodies the same elemental unleashed spirit. The boisterous red infuses the tangle of gestures with a primal almost savage pulsation. A self-described “old soul,” her home town of Trogir on the Dalmatian coast was founded as an ancient Greek settlement, and perhaps instinctually she visually gives the all-American twisters the unflagging intensity of Athenian tragedy.

Boundless and dynamic, Nadaleena’s twisters allow the viewer to get swept up in their own interpretation and response. The open-ended Biblical and mythological overlays align with the artist’s ongoing metaphysical interest. Nadaleena has a PhD in the subject from the University of Metaphysics in Sedona, Arizona, for which she wrote her thesis on the healing capacity of art and visualization. In this regard, she indicated that the twisters can even be viewed as internal state of mind or being. All the rampaging fierceness is potentially cathartic for both the artist and the viewer, with a resulting release and spiritual renewal. After the turbulence and devastation, come the calm and the sunshine in a cycle that shows “this too shall pass.” In citing this proverb, the ever-optimistic artist connects the Twister series with the theme of survival, one that she recognizes in her own life story.

Now Nadaleena has appeared on the art horizon with all the suddenness and a swath of a tornado. Fetching as much as seven figures, her new works are flying off her easel, awaited by collectors even before the paint has dried. 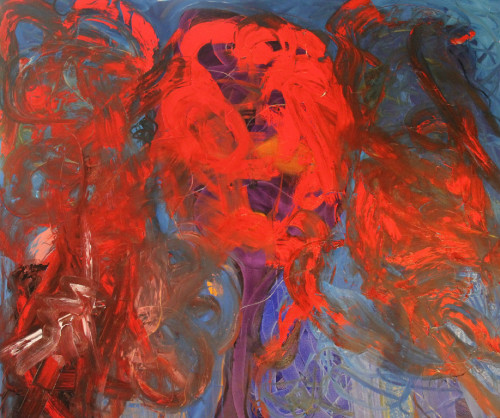 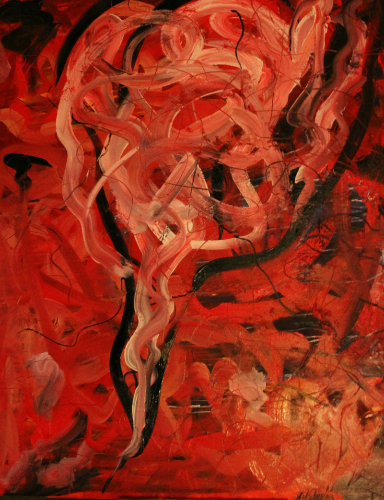 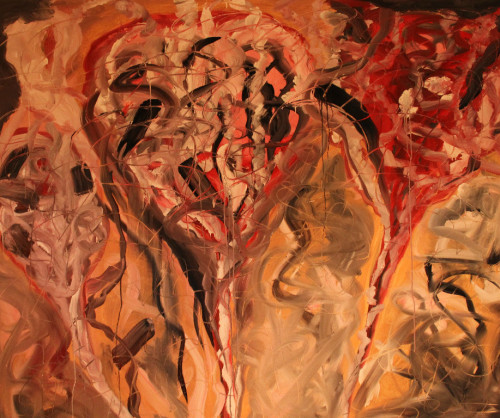 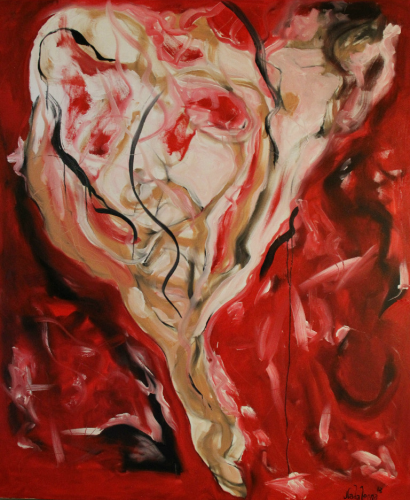