Spend any time gallery hopping in Santa Fe and Taos, and you might get the idea that artists are as plentiful here as the native piñon trees.  This area of New Mexico has held a special position in American art for over a century, attracting creative spirits from around the world. Many are captivated by the extraordinary quality of light, but even more are drawn to an unfettered quality of life.

Amid this concentration of talent, Robert Daughters is recognized as one of the Southwest’s masters. Yet he began his days far away from this high desert country, achieving prominence as a commercial artist in the Midwest. Born in 1929 in Trenton, MO, and raised in St. Joseph, he followed his years of military service with study at the Kansas City Arts Institute and School of Design.

At school he met his future wife, Sandra, who was studying fashion art. Upon their marriage in 1953, they spent their honeymoon in Taos, where a friend of his wife’s family, Oscar E. Berninghaus, had been a founding member of its art colony. Arriving at what was then a remote outpost, the young couple was greeted by Oscar’s son Charles, who was himself a rather flamboyant character. Told by an uncle that Taos was the place for an artist, Daughters fell in love with the primitive romance of this tri-ethnic community.

Yet he returned to Kansas City, where he built a nationally recognized advertising studio with a client list which included Lee Jeans and Parker pens. Having risen to the top of his game, Daughters, at the age of 41, walked away from his success and moved to Santa Fe. Then two years later he fulfilled the ultimate fantasy: settling in Taos in none other than the Oscar E. Berninghaus house.

Redefining himself in his new surroundings, Daughter’s transition to fine art was challenging. Instead of a client’s whim or the fashion of the day, he studied traditional artists and painted in a somewhat academic manner. The pivotal point came when he embraced an impressionistic style and abandoned contrived subject matter for more familiar scenes.

The work that followed was linked with that of other artists who were painting outdoors, or plein air. Known as the Taos 6, the band of painters worked in a land somewhat rougher than their 19th-century French counterparts, judging from Daughters’ account of hearing “the crack of a rifle” while going about his business. Although jealousy within the group led to its demise, the Taos 6 preserved the unrivaled position of this provincial center as a major artistic force.

Daughters then developed an aesthetic influenced by Post-Impressionist artists, especially Van Gogh and Bernard. Responding to the intense, pure expression of medieval decorative arts, these men concentrated form into blocks of jewel-like color — often outlined in black. This technique, referred to as cloisonnism, lent to Daughters’ painting a new simplicity and luminosity equal to his vision of the Southwest.

Like the Post-Impressionists, Daughters finds an affinity between painting and music in the structured arrangement of tone. Calling this approach “composist,” he intuitively seeks relationships of color and form that adds interest yet is balanced, striking the right note so to speak. Music is a constant companion; and while traveling through the New Mexico countryside, the view will be scored by the melodies of Mozart or Jimmy Buffet.

The cover painting, La Cienega Road (2003, 20” x 24”, oil) depicts the edge of a little village southwest of Santa Fe along the Santa Fe River. The central focus is a large cottonwood tree. The left side of its canopies falls on the center line of the composition, but the mass of the golden yellow ball falls to the right. As a counterweight, Daughter places a house on the hill, to which your eye is drawn. The house is framed by the dark blue mountain in the background, which is offset by the pink road at the lower right.

Daughters indicates that the canvas started out dark. The early morning light, favored by the artist, casts long dark shadows that seem to ooze through the scene. Then in brightening the composition, he added touches of red, most notably in the orange highlights and the swath of road that invites you in. Believing in “beautiful accidents,” Daughters adds the sheer delight of a little green tree, like a single voice rising above a chorus of bass and tenors.

Creating a dynamic space, shadows cast by the cottonwood and green trees form a diagonal axis with a trajectory towards the distant house.  The moorings of the composition are enlivened by Daughter’s vivacious brushwork, such that the very ground seems to ripple. The painted spikes representing a rustic fence almost undulate, and the sky above shifts and dances with the cottonwood canopy.

Even though Daughters has a relaxed, easy-going manner, his life has been nomadic. He and his wife have owned, finished, and sold 26 houses. Previously the couple have spent part of the year at their homes in the Catalina foothills of Tucson, AZ, and by the Sea of Cortez in Mexico, a residence which has a special spot in the artist’s heart. Now they live only at their Santa Fe home, which they share with 3 cats, but continue to travel to far-off places.

Last year Daughters and his wife celebrated their 50th wedding anniversary. Her primary creative outlet is decorating their house, but she also contributes to her husband’s work by weighing in on his paintings. Together they enjoy a circle of friends that aren’t artists and the visits of their 3 adult children.

Daughters has discovered that to make satisfying art you “don’t have to kill yourself.” Drawn to those activities that “might be fun,” he has managed to dominate his field as one of the top sellers on Santa Fe’s street of galleries, Canyon Road. His brightly-colored prints have a popular following; and when Southwest Art Magazine recently marked their 30th anniversary, they chose Daughters for their cover. 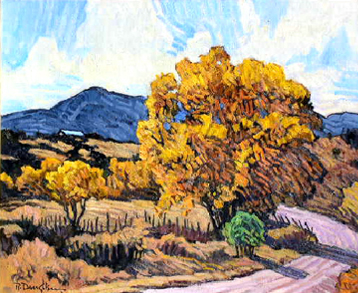