Getting through our everyday lives requires a practical outlook. If rain pours from above, typically we run for cover rather than stand and gaze at the watery spectacle. As we drive through city streets, we see a red light and stop instead of staring transfixed at its fiery glow. A magnificent sunset may capture our attention and inspire delight, but we usually restrict this aesthetic response to moments when it’s deemed reasonable. After years in such a no-nonsense world, Sharon Mitchell turned away from a spreadsheet-based domain of business and government to the realm of wonder lurking within. Feeling its undertow, she yielded to her imagination, whose power transforms ordinary experiences into the magical. Certainly her executive acumen was always enhanced by creative vision, but now Mitchell forgoes the workaday for the fanciful in colorful paintings of distilled memories and dreams.

Born in Elmira, New York and currently calling Cape Elizabeth, Maine home, Mitchell has resided in these and other towns in most of the New England states. Extending from the Finger Lakes district to various points along the northern Atlantic coastline, this territory became a part of her psyche, as personal and professional demands called for frequent relocation and travel. In Mitchell’s art, this becomes the province of carefree recollection with fairy-tale landscapes and pictures of animals suggestive of fabled characters: Chemung River Valley scenes are made up of brocaded hills like a setting for Scheherazade’s stories; will-o’-the-wisps beckon across bespangled fields; dappled creatures could belong in the pages of a sorceress’ bestiary. Mitchell synthesizes her forms to convey their essential qualities along with the joyful, peaceful feelings they evoke in her. Simplified in this way, they become elements in playful arrangements. Motifs are repeated, softened, and — in combination with painterly embellishments of dots and suffused color — coalesce into patterns like those of embroidered or chiffon fabrics. One might think Elmira was a mythical paradise and interstate highways the ancient Silk Road routes.

Studying Buddhism, she found a Nepalese pen pal, which led to the establishment of Emerald Tara, a retail shop that sold rugs, pashmina, and women’s clothing and jewelry. Returning to her hometown, Mitchell bought a magnificent Queen Anne Victorian, which she restored, painted pink, and turned into a shop, gallery, and studio. Her zeal for preservation led to becoming a founding member of Historic Elmira, and her satisfaction as a painter generated a whirlwind of public activity. Always energized by working with and for people, she became more politically and civically engaged in significant campaigns and projects. Seeing the need, Mitchell threw herself into establishing and heading the Community Arts of Elmira, which involved acquiring and restoring the Langdon-Pratt Mansion. In her activism, the artist worked to make real the halcyon days suggested in her optimistic compositions; but making waves in certain circles brought Mitchell misfortune, and her dearly loved Queen Anne was destroyed by arson along with the majority of her artwork to date. With spirituality, muse, and ever-present determination intact, she rose from the ashes and rededicated herself to her art.

Certainly no Pollyanna, Mitchell instead paints an alternative world through varicolored glasses. Composing a most exuberant palette, Mitchell intuitively selects ravishing hues such as chartreuse, indigo, marigold, and shades of berries. Using oils for their depth and richness, she at times liberates pigment from any defining form with irregular circular shapes. Enlivening her compositions, these dots seem to be shimmering effects of light, bubbles or bursts of sheer glee, or maybe the love that’s all around us. Mitchell also creates works entirely of dots, which are arranged in radiating or spiraling orbits like diagrams of souls or of life forces. At other times, she lets color expand as in a liquid pool or hover weightless in air, inviting the viewer into their own reverie: blurs of red and blue turn into poppies and dissolve again; fluorescent ocean mists pull us like a siren’s song. In Mitchell’s art, resonating color overwhelms any pictorial rendering and occupies its own ambient space, and this dematerialization fosters a feeling of enchantment, daydream, or trance. Blending childlike wonder with a mystical impulse, Mitchell reminds us that truth isn’t always found in reality. 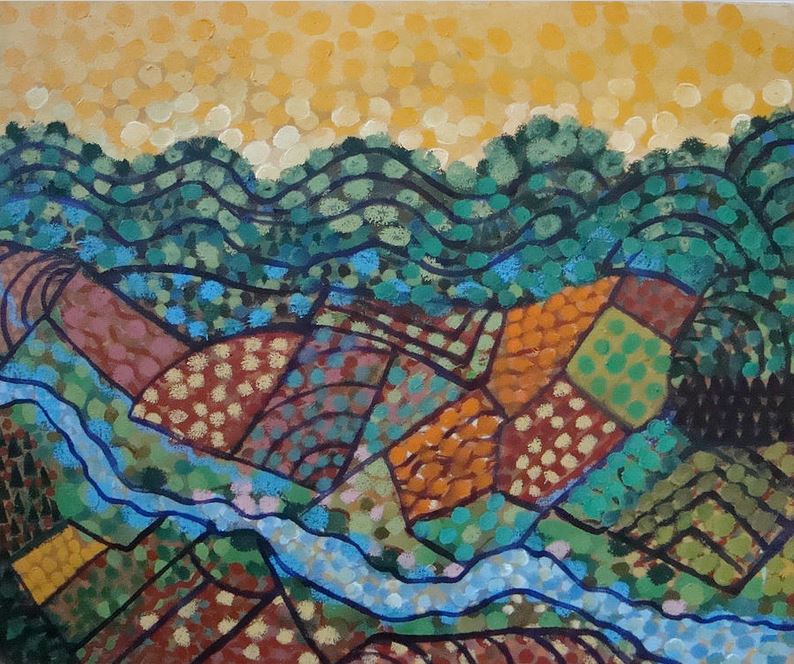 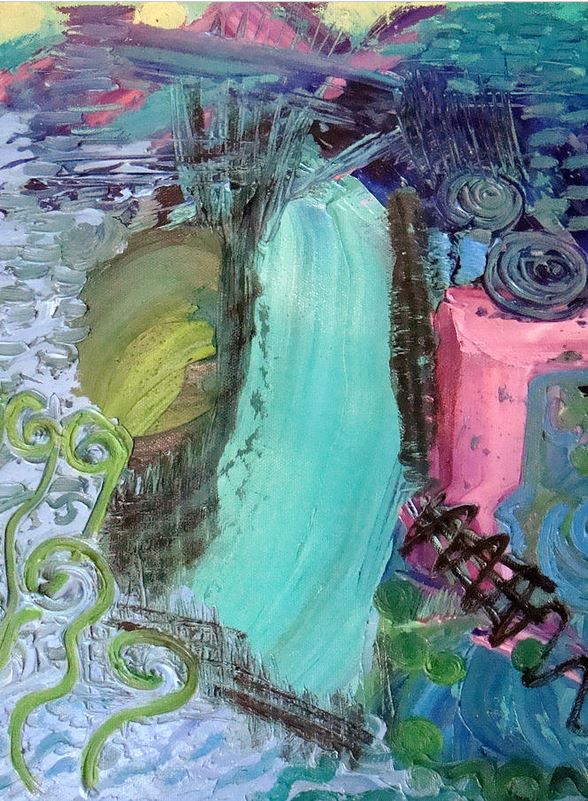