If anyone defies the notion of the tormented artist, it is Thom Wheeler. Comfortable in his skin, Wheeler makes art that springs from a joy of living and an unflinching optimism. His combined home and studio is open to casual tourist and connoisseur alike, who soon find themselves wanting to take away a little piece of bliss

A self-described “people person,” Wheeler has a love for humanity as manifested in its cultures, artifacts and symbols. His space is filled with old metal toys, western memorabilia, rocking horses, military collectibles and Art Deco fixtures — all illuminated by light through brilliant stained glass. Each object is a remnant of 20th-century fantasy that recalls crafted relics of centuries past. In Wheeler’s art, history goes backward, as his fashioning of an object or form taps into the timeline of human expression.

Time was when Wheeler created monumental works that embodied the exuberance of the oil boom in his native Texas, but after migrating to Taos in 1985, he quickly turned to New Mexican themes and customs in his sculptures and “wall jewelry.” His iconic crosses and use of metal and stones extended traditional practices through his idiosyncratic vocabulary of emblems and patterns. Texturing the metal and applying ornamentation, Wheeler created contemporary pictorial reliefs that echoed art from distant, storied civilizations.

With turquoise insets, The Grand Hotel references Navajo metalwork, and yet the language of the piece is reminiscent of another agricultural-warrior society, the Homeric heroes of ancient Mycenae. Where Achilles’ shield may have brutalizing symmetry, Wheeler turns his wall hanging on its ear with wry humor. Suggestive of a parallelogram, the shape is insistently irregular. Rather than hammered, the pictographs are made spontaneously from sand castings that incorporate pressed seashells. In the artist’s impish masquerade, Agamemnon’s mask becomes windswept faces of visitors to the Texas Gulf Coast.

Using a variety of metals, such as copper, aluminum and bronze, Wheeler transforms his materials into a multilayered composition of light by manipulating density, texture and polish. His low-relief motifs, comprised of organic lines and bulbous shapes, celebrate the pliable fluidity of metal rather than its hardened chill. These playful, glittering forms float in a field of gestural lines and shadings that catch the changing ambient light, so that each piece immediately partakes of its setting and simultaneously becomes a focal point.

In past ages, there were no works of art. Without museums and galleries, the pre-industrial world made no distinction between the beautiful and the useful. Nineteenth-century artists longed for the “good old days” when the simplest object was adorned by human hand, and artists like Gauguin valued the decorative as an expression of common beliefs in daily existence. Sharing in this same sensibility, Wheeler’s art tends toward a unity of architecture, painting, sculpture and all crafts.

Wheeler has taken to painting. If his sculpture tends toward painting, his painting tends toward sculpture. “Holding out the brush” is an alien and alienating experience for him. So he uses a palette knife, which allows him to work the oil paints in a way that is akin to his texturing of metal. Wheeler prefers oils, because they are more “alive,” and his application of thick, saturated colors seems to absorb rather than reflect the light. Simplifying his subjects, he creates complexity with interplay between the agitated surface and the interlocking design. Elements coexist within the painting, and colors “hit each other.”

In Black Hill, Wheeler selects the oft-depicted church at Ranchos de Taos, emblematic of both spirituality and community, and distills it to essential form. The blood red and deep sorrel brown pigments provoke physical, emotive and historical associations. Suggesting the nearby sacred mountain, the expanding black triangle also becomes a void into which the church seems to merge. The central forms of the church throb like a beating heart. The spatial configuration is made more ambiguous and dynamic by the sparring of the earthen-orange ground and the complementary brilliant blue sky.

The Ranchos church is juxtaposed with a very different shape in Lady of Ranchos, in which a jade, turquoise (or is it a ‘50s Thunderbird?) structure is the backdrop for a Modigliani-like nude. Adhering to the natural, the central forms are visual equivalents of the woman’s bent leg, and the arm behind her head becomes the mountain. Darkened blue or black is sometimes willful negative space, and sometimes a window or pubic hair. Formally, Wheeler delights in a tonal on-off punctuation, as he revels in the thematic coupling of sacred and profane.

Without judgment but with discernment, Wheeler hones in on where and how people make meaning. Rowe Church envisions a basic religious architectural form within a stream of earth and sky. Just as Gauguin found spiritual purity in Brittany, Wheeler responds to the impulse for the divine in this simple community. While a Christian symbol, the crosses on the steeple and roof, the cemetery and the church itself also express the fundamental relationship of horizontal and vertical that exists in our direct experience of earth and sky, which is reiterated throughout human expression.

Often he jauntily tilts this symbol into the “rolling cross,” a component of The Grand Hotel and a major figure in Appaloosa Sky. Humorously, the sky of the title is a white rectangular shape or opening dotted with black ovoids, à la the characteristic markings of the world’s oldest identifiable horse. As do his other enamel-on-copper works, this painting has a tinge of nostalgia for the materials of everyday 20th-century artifacts. The designs of our youth now commingle with that of earlier human history, like an abandoned Chevy pickup in an ancient New Mexico landscape.

In Wheeler’s ceaselessly creative mind, there is a continuity between art and life and between the eternal and the mundane. Always perceiving an interconnectivity in his visual frame of reference, he takes pleasure in patterns, shapes and found objects. While some may run for cover, Wheeler stands in awe of a bolt of lightning that looks like a cross. His visual intelligence tweaks, twists and reshapes in order to explore the endless variety and plasticity of any one motif. Delighting in materials, Wheeler picks up a new medium and “figures it out,” finding a way to make it uniquely his.

Wheeler’s variations on the cross are paralleled in his visual musings in black and white. At a restaurant with the artists Ed Sandoval and Ann Huston, Wheeler couldn’t take his eyes off Huston’s black-and-white striped scarf, purchased at Wal-Mart, draped over the back of a chair. Taking it to his studio, he introduced the scarf into the enigmatic coiled shape at the top of Burning Landscape. The alternating design reminds the artist of King Tut’s tomb mask: a “big box” piece of adornment is on a par with the splendid treasures of ancient Egypt.

A few years ago, German patrons living in south Texas bought one of his sculptures, only to have it wash away in the flooding river. Retrieved a good distance away, the metalwork was battered and dirty but still intact. Wheeler was able to clean and resurface it to make the piece look as good as new. In a way, the disaster that it had been through somehow made it even more satisfactory to the artist. Little wonder that Wheeler thinks of his creations as holding up to a “1000-year plan,” and he has the faith to believe that humanity will survive to see them. 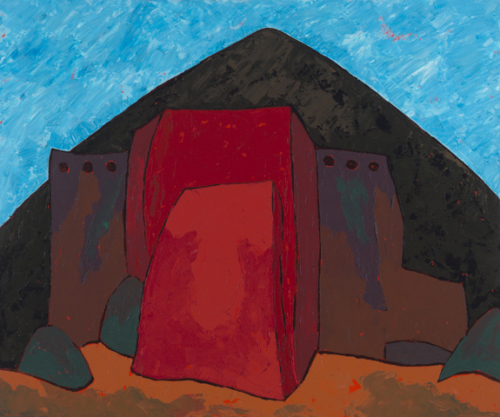 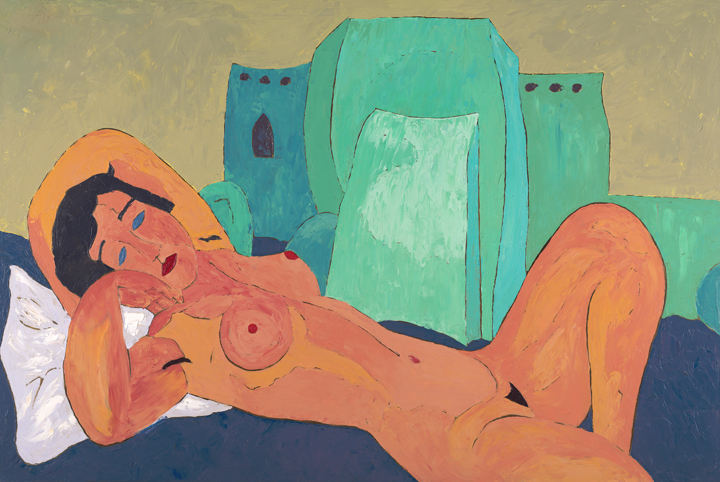 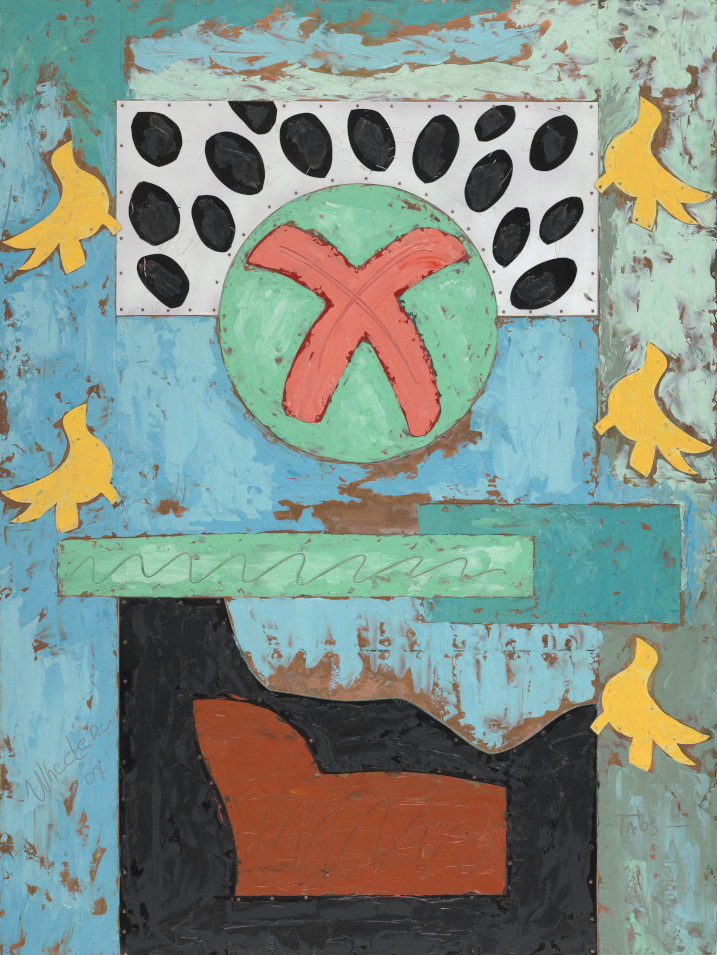