Wayne Thiebaud is one of a dozen painters included in the list of 214 National Medal of the Arts honorees, recognized by the president of the United States for their contribution to the quality and sustenance of the arts. Receiving his medal in 1994, Thiebaud entered the ranks of cultural treasures like Ella Fitzgerald, Arthur Miller, Eudora Welty, and Bob Hope. Assured a place in modern art history, this artist humbly regards his life as a painter an honor in itself:  “…the inspiration and the challenge that you live with,” Thiebaud says, “is quite a wonderful privilege to be a part of…that’s certainly enough.”

Marking the turn of the millennium, a Thiebaud retrospective toured four major museums including the Whitney in New York. When the artist first garnered national attention in the early 60s, his paintings of cakes and pies were categorized as Pop Art companions of Andy Warhol’s soup cans. Viewed forty years later, his thickly painted confections appear more at home with the still-life paintings of masters like Chardin or Manet. Never succumbing to repetition, he has spent a lifetime pursuing this genre as well as the painterly themes of figure study and city and landscape: “…raising questions and developing problems which you hope may add to the overall Great Tradition of what painting has been.”

For Thiebaud, the history of painting reveals the unfolding of human consciousness, with different styles mirroring our humanity. “Painting…helps inform us about where we are but also about where we might be able to go.” The power of painting transcends language by communicating directly with the body, and he conceptualizes in terms of the art’s “musculature,” “skin,” “pressure and tension” to arouse “our empathy factors.”

Color has a direct effect upon the body, so that we respond differently to tangerine and indigo blue. Thiebaud is a supreme colorist who arouses pleasure through the juxtaposition of such warm and cool colors. Using a technique he calls halation (think “halo”), he outlines contours with two or three, usually complementary, colors, creating a deepening resonance and pulsation.

His distinctive palette consists of “as much as possible the total spectral range,” in an attempt to develop “a metaphor of sunlight.” Born in Mesa, Arizona, his family moved to Long Beach, California, and he has spent the majority of his adult life in the Sacramento and San Francisco areas. Speaking of an essential impulse of “migrating to the Sun Belt,” he wants his canvases to stimulate with the directness of sunlight on the skin: “some sort of need for the body to feel, I think, in, somehow, approximation of sunlight, warmth, or sensualness.”

The unabashed hedonism of his work is an anomaly among the more adventurous art of the last quarter century. He is firm in his belief that “there is beauty, there is quality — even though we can’t lasso it an put it in a corral.” Rather than a fixed canon, beauty is the object of an endless pursuit, constantly redefined. For Thiebaud, its very elusiveness accounts for all the marvelous variety of artistic expression.

The cover painting, Brown River (2002, 72” x 60”), is part of a series of riverscapes drawn from the Delta region of northern California. During the four and half years when the Thiebaud family lived near its banks, the artist’s attempts to capture it in paint fell short of his expectations. Almost by necessity, the subject became a challenge that he had to face.

As a boy, Thiebaud spent time on his grandfather’s farm in Orange, County, and for a brief period during the Depression, his family moved to Utah to try farming. His acquaintance with the ritual of farming is first-hand, and he portrays the working of the land as a creative endeavor — a human attempt to harness the raw power of nature.

Rather than recede into the distance, the brown river of the title snakes through the composition from the top to the lower right of the canvas, its form echoed by the man-made irrigation system of canals and ditches. Such sinuous lines have long been associated with beauty, particularly in the way they emulate the female form. Posed against a dazzling patterned field, the flesh-colored river has the loveliness of Botticelli’s Venus.

Lavender, pink, and yellow are grounded by the reddish-brown jigsaw-puzzle shapes that pinch the midsection, as life bursts forth between fallow fields. A Westerner, Thiebaud recognizes the preciousness of water as a source for vegetation and life. In his canvas, the flow of the river cuts through the regularity of the fields and orchards, seeming to animate with a vital force. The earth’s body reflects our own, as the river seems like a blood vessel nurturing tissue.

Inviting us into his riverscape through the bold graphic elements of shape and color, Thiebaud makes us linger in detailed nuances. Scaled to the human body, the canvas has an immediate physical impact. Then our eyes visit the “little world” the artist has created with subtle flicks of his brush. Waiting to be discovered, each element is described by a complex range of color and gesture. Grasping the geography of place from immediate to global, Thiebaud satisfies by providing a full account and a context beyond routine experience.

The perspective is a composite of “a whole series of different views,” such as “almost directly on the ground, then slightly up,” “imagined views from very high,” and “helicopter height.” If one examines the details, you can see that the light source may be coming from different points, so that the shadows are cast in different directions. Thiebaud deliberately introduces opposing elements or dissonances which suggest “a contrast between the rage for perfection and yet making sure that you recognize that that’s not possible.”

Now eighty-three years old, Thiebaud brings us work equal to the ripeness of his years. Transcending any specific allusion, the delicate balance of the river’s current and man’s cultivation harkens back to the origins of civilization. While striking a note of timelessness, Thiebaud dialogues with the past, adding his response to this ageless theme.  Like our collective history or like one man’s life in art, the river courses on. 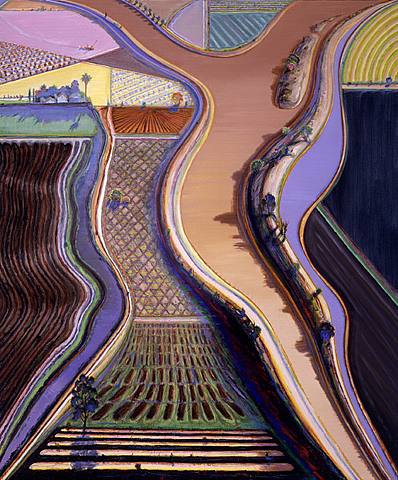